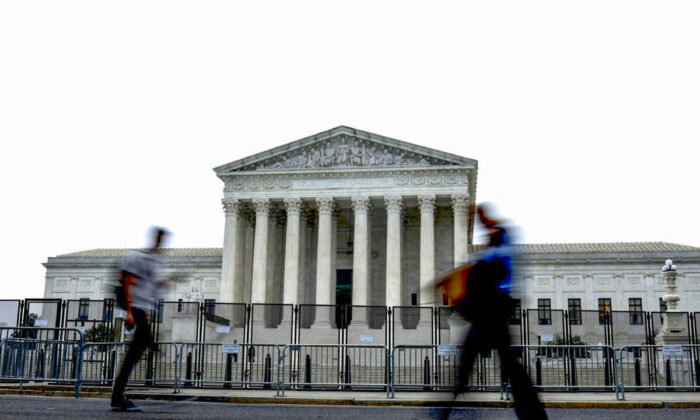 People walk past the Supreme Court building during a rainstorm in Washington, D.C., on June 23, 2022. (Anna Moneymaker/Getty Images)
Constitutional Rights

The decision is regarded as a victory for religious freedom.

In the case, the high court held that the free exercise and free speech clauses of the First Amendment protect an individual engaging in a personal religious observance from government reprisal.

The court found that the U.S. Constitution neither requires nor allows governments to suppress such religious expression.

Coach Joseph “Joe” Kennedy, who no longer works for the taxpayer-funded Bremerton School District in Washington state, claimed his rights were violated when the district forbade him from praying in view of the public after games.

The school district argued that when Kennedy prayed midfield after games, he was viewed by onlookers as a coach who was serving as a mentor and role model.

In this theory of the case, Kennedy was acting as a government employee at that moment, which would mean that he was engaging in speech that constituted government speech that isn’t protected by the First Amendment.

But the majority of Supreme Court justices disagreed with the school district in Kennedy v. Bremerton School District (court file 21-418), an appeal from the frequently overturned U.S. Court of Appeals for the 9th Circuit.

Justice Neil Gorsuch wrote the majority opinion (pdf) for the court. All six conservative justices, including Gorsuch, ruled in favor of Kennedy; all three liberal justices ruled against him. Oral argument was heard on April 25.

Gorsuch noted that Kennedy lost his job as a high school football coach in the Bremerton School District “because he knelt at midfield after games to offer a quiet prayer of thanks” during a period “when school employees were free to speak with a friend, call for a reservation at a restaurant, check email, or attend to other personal matters.”

In other words, Kennedy offered “his prayers quietly while his students were otherwise occupied.”

The school district disciplined him because it believed anything less might lead a reasonable observer to mistakenly conclude that it endorsed Kennedy’s religious beliefs, Gorsuch wrote.

The district was wrong to do so, the justice added.

“The Free Exercise and Free Speech Clauses of the First Amendment protect expressions like Mr. Kennedy’s. Nor does a proper understanding of the Amendment’s Establishment Clause require the government to single out private religious speech for special disfavor.

“The Constitution and the best of our traditions counsel mutual respect and tolerance, not censorship and suppression, for religious and nonreligious views alike,” Gorsuch wrote.

Justice Sonia Sotomayor filed a dissenting opinion, which was joined by Justices Stephen Breyer and Elena Kagan. The dissent characterizes Kennedy as a wrongdoer.

“This case is about whether a public school must permit a school official to kneel, bow his head, and say a prayer at the center of a school event,” Sotomayor wrote. “The Constitution does not authorize, let alone require, public schools to embrace this conduct.”

The Supreme Court is wrong to ignore “the severe disruption to school events caused by Kennedy’s conduct, viewing it as irrelevant because the Bremerton School District … stated that it was suspending Kennedy to avoid it being viewed as endorsing religion.”

Kennedy was responsible for “repeated disruptions of school programming and violations of school policy regarding public access to the field as grounds for suspending him.”

“This decision does a disservice to schools and the young citizens they serve, as well as to our nation’s longstanding commitment to the separation of church and state.”

Mat Staver, founder and chairman of public interest law firm Liberty Counsel—which filed a friend-of-the-court brief in the case—said he was pleased the high court held for Kennedy, but expressed concerns about the future implications of the ruling.

As a result of the Kennedy ruling, “lower court judges will no longer apply Lemon’s framework to establishment clause cases,” Staver said in a statement.

“But it’s not clear how those lower court judges should now navigate questions about the separation of church and state. Although the Court overrules Lemon, it does not announce a fleshed-out test that will replace Lemon,” he said.

“Instead, Kennedy announces a vague new rule that the Establishment Clause must be interpreted by ‘reference to historical practices and understandings.’”

The court is trying to dispose of a backlog of cases before it leaves for summer recess. With the release of the three opinions, four remain to be released in the court’s current term.

When it wraps up, Breyer is expected to formally leave the court and be replaced by Ketanji Brown Jackson, President Joe Biden’s nominee who was narrowly confirmed by the U.S. Senate on April 7.

On June 27, the court announced it will next issue opinions on June 29.