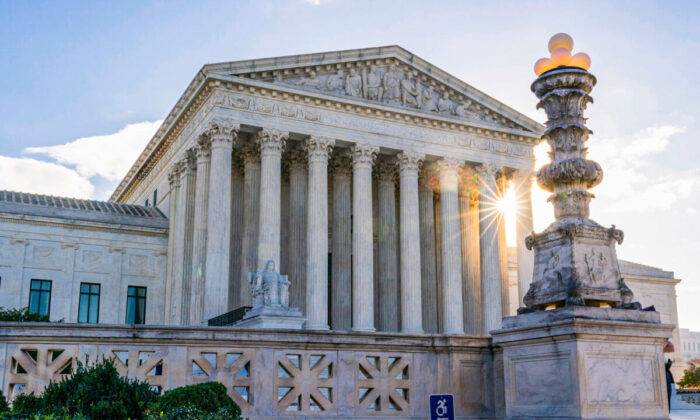 The Supreme Court ruled 6-3 in the case of a New York man suing police for malicious prosecution to relax the legal standard for bringing such lawsuits in federal courts, overturning the tougher prevailing standard.

The officers raided the home of petitioner Larry Thompson, a U.S. Navy veteran living in Brooklyn, N.Y., with his wife. At the time of the incident, the couple, parents of a one-week-old daughter, were caring for the wife’s sister, who has cognitive challenges. On Jan. 15, 2014, the sister dialed 911 to report the baby cried when Thompson changed her diaper and mistakenly identified diaper rashes as signs of abuse.

Emergency response personnel arrived to find the wife sitting on the couch holding the baby safely. Unaware his sister-in-law had called 911, Thompson asked the technicians to leave and they complied, according to his petition filed with the Supreme Court. Then four NYPD officers arrived and said they were investigating possible child abuse and needed to look at the child.

The police entered over Thompson’s objections, threw him to the floor, handcuffed him, and conducted a search without seeking a warrant. The technicians found no signs of abuse on the infant’s body and took her to a hospital, where the lack of abuse was confirmed. The police escorted Thompson out of the apartment building and put him in jail for two days. Prosecutors dropped the charges against him, and he sued.

“Until today, police officers who framed an innocent person—for instance falsifying or planting evidence—could get a free pass. After the bogus charges were dismissed, the innocent person whose life had been upended had no recourse in court. That unjust rule applied across most of the country,” Ali said in an emailed statement to The Epoch Times.

“Not anymore. Today’s Supreme Court opinion unqualifiedly held that the innocent person can bring a federal civil rights action against the officer. This is a welcome and much needed step toward greater accountability when officers engage in misconduct and abuse the public’s trust.”

Kavanaugh noted in the opinion that Thompson had been charged and detained, but the charges “were dismissed before trial without any explanation by the prosecutor or judge.” Thompson sued, claiming the officers “maliciously prosecuted” him without probable cause, contrary to the Fourth Amendment.

According to Heck v. Humphrey (1994), under federal civil rights law Thompson must show there was a “favorable termination” of the underlying criminal prosecution, the justice wrote.

That precedent held, according to a summary, that such a claim for damages cannot advance unless the plaintiff can prove the conviction or sentence had been “reversed on direct appeal, expunged by executive order, declared invalid by a state tribunal authorized to make such determination, or called into question by a federal court’s issuance of a writ of habeas corpus.”

That standard is wrong, Kavanaugh wrote, finding that in a Fourth Amendment claim for malicious prosecution “a plaintiff need only show that his prosecution ended without a conviction. Thompson satisfied that requirement in this case.” The officers “are still protected by the requirement that the plaintiff show the absence of probable cause and by qualified immunity.” The decision of U.S. Court of Appeals for the Second Circuit was reversed and the case “remand[ed] for further proceedings consistent with this opinion.”

In his dissent, Alito quoted from “The Iliad” by ancient Greek poet Homer, likening the Supreme Court’s reasoning to the epic poem’s “‘grim monster’ made of ‘all lion in front, all snake behind, all goat between.’”

“Today, the Court creates a chimera of a constitutional tort by stitching together elements taken from two very different claims: a Fourth Amendment unreasonable seizure claim and a common-law malicious-prosecution claim.”

But this court “has never held that the Fourth Amendment houses a malicious-prosecution claim, and the Court defends its analogy with just two sentences of independent analysis and a reference to a body of lower court cases. I cannot agree with that approach,”  he said.