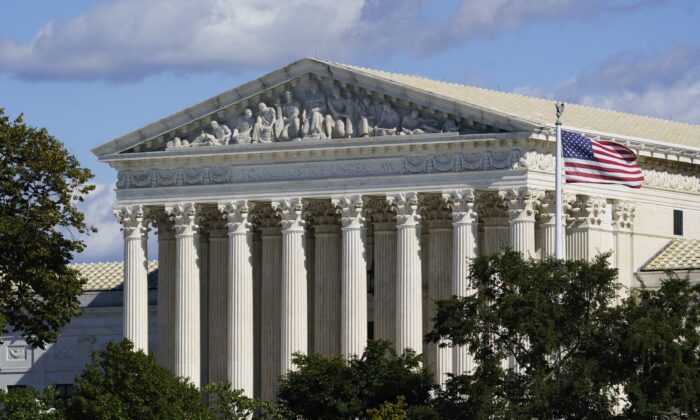 The Supreme Court is seen in Washington. in a file photograph. (J. Scott Applewhite/AP Photo)
Judiciary

Supreme Court Rules Against Mississippi in Water Fight With Tennessee

The Supreme Court on Monday ruled against Mississippi’s claim that Tennessee was improperly taking water.

The case was filed years ago by Mississippi, which alleged that a Memphis-area utility provider was wrongly pumping groundwater from a portion of the Middle Claiborne Aquifer, which lies beneath eight states.

The case “involves a long, continuing, intentional invasion of Mississippi’s sovereignty in violation of the United States Constitution,” Mississippi officials wrote in a 2014 brief. The state asked the court to grant it over $600 million in relief.

Tennessee officials disagreed, arguing no state can claim ownership over a “shared, interstate resource” unless such a claim is established by a decree or interstate contract. They wanted the lawsuit dismissed.

All nine justices sided with Tennessee.

“The court rejects Mississippi’s contention that it has a sovereign ownership right to all water beneath its surface,” Chief Justice John Roberts, a George W. Bush nominee, wrote (pdf) for the court.

Roberts noted that all of the wells in question are located in Tennessee.

Mississippi tried to convince the court that the doctrine of equitable apportionment, which aims to allow states that share a water resource to each get a fair allocation, did not apply to the case.

Justices said that it does.

A special master appointed in the case had advised the court to let Mississippi file an amended complaint seeking equitable apportionment. Tennessee opposed the recommendation.

Roberts said the court declined to weigh in since Mississippi had never sought such leave, “nor can we assume Mississippi will do so.”

If Mississippi were to file an amended complaint, the court would need to consider a broader range of evidence, other states that share the aquifer would need to prepare filings, and Mississippi would have to prove “by clear and convincing evidence some real and substantial injury or damage,” he added.

In a brief emailed statement, the office of Mississippi Attorney General Lynn Fitch told The Epoch Times, “We respect the decision of the court.

The office of Tennessee Attorney General Herbert Slatery III did not return a request for comment.

Also on Monday, the Supreme Court turned down an appeal from the Project Veritas journalism group concerning a Massachusetts law that bans secret recordings.

The unsigned order keeps the law, which makes it a felony to secretly record the oral communications of anyone other than a law enforcement officer, on the books.