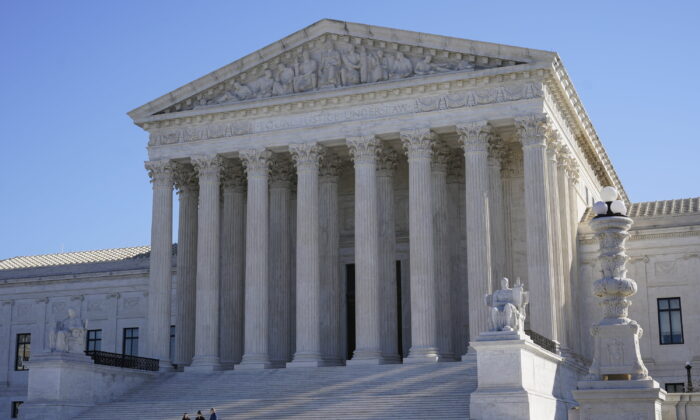 Visitors walk outside the Supreme Court building on Capitol Hill in Washington, on Feb. 21, 2022. (Patrick Semansky/AP Photo)
By Matthew Vadum

A divided Supreme Court ruled 5–4 on May 16 against a longtime illegal alien who falsely claimed to be a U.S. citizen on a driver’s license application, upholding a law that prevents federal courts from reviewing factual findings made by the Department of Justice in deportation proceedings.

The new ruling suggests that federal law isn’t sympathetic to individuals who falsely hold themselves out as U.S. citizens.

Pankajkumar Patel is a citizen of India who has lived in the United States since entering the country unlawfully in February 1992. He is married and has three children.

Patel checked a box on a driver’s license application in Georgia identifying himself as a U.S. citizen. He later claimed that he checked the box inadvertently, then tried to obtain lawful permanent resident status under a process authorized by Congress called “adjustment of status” that allows individuals who are physically present in the country to upgrade their immigration status to lawful permanent resident without having to leave the country.

In 2012, deportation proceedings began before an immigration judge. Patel said his application for adjustment of status was a defense to deportation and renewed his request to be processed for a green card. The U.S. Department of Homeland Security countered that the false claim of U.S. citizenship undermined his defense. The immigration judge agreed.

The Board of Immigration Appeals (BIA) then held that Patel was inadmissible under federal law because he “falsely represented” himself as a U.S. citizen for a benefit under state law.

The U.S. Court of Appeals for the 11th Circuit declined jurisdiction to review whether Patel was inadmissible for representing himself as a U.S. citizen. The 11th Circuit separately held, contrary to a precedent-setting BIA decision, that the relevant federal law makes noncitizens inadmissible even if their misrepresentation of citizenship is immaterial to the government benefit sought.

Barrett wrote in the decision that Congress “has comprehensively detailed the rules by which noncitizens may enter and live in the United States.”

“When noncitizens violate those rules, Congress has provided procedures for their removal. At the same time, there is room for mercy: Congress has given the Attorney General power to grant relief from removal in certain circumstances,” she wrote.

But federal courts “have a very limited role to play in this process. With an exception for legal and constitutional questions, Congress has barred judicial review of the Attorney General’s decisions denying discretionary relief from removal. We must decide how far this bar extends—specifically, whether it precludes judicial review of factual findings that underlie a denial of relief,” Barrett wrote.

In his dissent, Gorsuch claimed that a bureaucratic error doomed Patel.

“It is no secret that when processing applications, licenses, and permits the government sometimes makes mistakes,” the justice wrote. “Often, they are small ones—a misspelled name, a misplaced application. But sometimes a bureaucratic mistake can have life-changing consequences. Our case is such a case.”

Even though Patel may have made a mistake on the Georgia driver’s license application, this case, contrary to Gorsuch’s statement, isn’t about the government making a mistake.

The 11th Circuit specifically stated that “there was no dispute that Patel made a false representation of citizenship.” The immigration judge in the case “rejected Patel’s arguments” and “determined that Patel was not credible.”

Patel was “evasive when testifying and would not explain to the Court exactly what the mistake was,” the circuit decision reads. “The evidence contradicted Patel’s testimony, which the IJ [immigration judge] already suspected was not candid, so the IJ did not believe Patel’s claim that he made a mistake. The IJ found that Patel willfully and purposefully indicated that he was a U.S. citizen.”

Gorsuch blamed the false citizenship claim on the government and lamented the law’s inflexibility.

“Today, the Court holds that a federal bureaucracy can make an obvious factual error, one that will result in an individual’s removal from this country, and nothing can be done about it,” Gorsuch wrote. “No court may even hear the case. It is a bold claim promising dire consequences for countless lawful immigrants.

“And it is such an unlikely assertion of raw administrative power that not even the agency that allegedly erred, nor any other arm of the Executive Branch, endorses it. Today’s majority acts on its own to shield the government from the embarrassment of having to correct even its most obvious errors.”