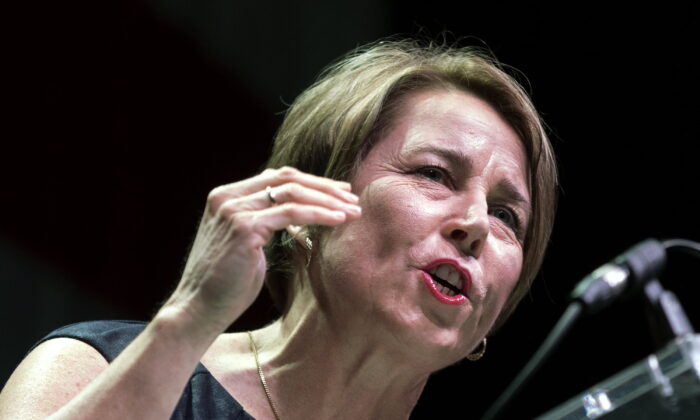 The Massachusetts law in question, the constitutionality of which is now in doubt, imposed a lifetime ban on purchasing handguns—but not possessing them—on anyone convicted of a nonviolent misdemeanor that involved the possession or use of guns.

The high court remanded the case, Morin v. Lyver (court file 21-1160), to the U.S Court of Appeals for the 1st Circuit “for further consideration in light of” the Supreme Court’s landmark June 23 decision in New York State Rifle and Pistol Association v. Bruen.

Massachusetts was previously added to Morin v. Lyver as an intervenor to defend the constitutionality of the state law.

The order was unsigned and no justices indicated they were dissenting from it. The justices didn’t explain why they granted the order.

In Bruen, a 6–3 ruling, the high court recognized a constitutional right to bear firearms in public for self-defense and struck down New York’s law that required an applicant to demonstrate “proper cause” to obtain a license to carry a concealed handgun in public.

The court also found that gun restrictions must be deeply rooted in American history if they are to survive constitutional scrutiny.

Massachusetts requires individuals to obtain licenses in order to possess or purchase handguns, and it disqualifies people with certain criminal convictions from obtaining licenses.

State law also provides that an individual convicted of a nonviolent misdemeanor that concerned the possession or use of a gun can obtain a license that allows him to possess a handgun at home, but only after five years have passed.

The same person can never obtain authorization to purchase a handgun—meaning that the only way he can obtain one is if someone leaves it to him at death, according to court documents.

Petitioner Alfred Morin’s legal troubles began in October 2004 when he traveled from his home state of Massachusetts to Washington with a handgun.

At the time, he possessed a valid Massachusetts License to Carry Firearms but was unaware that District of Columbia laws prohibited him from carrying his gun, despite having the Massachusetts license.

At the American Museum of Modern History, he saw a sign prohibiting firearms and approached a guard to inquire about checking his gun.

Police arrested Morin and charged him with carrying a pistol without a license, possession of an unregistered firearm, and unlawful possession of ammunition.

On Nov. 8, 2004, Morin pleaded guilty to attempting to carry a pistol without a license and possession of an unregistered firearm, both misdemeanors.

The Superior Court of the District of Columbia sentenced Morin to 60 days imprisonment on each count, three months of supervised probation, and 20 hours of community service. The court suspended the imprisonment portion of the sentence.

Morin later applied to police in his home state for a Firearms Identification Card and a permit to buy a firearm in February 2018. Respondent William Lyver, chief of the Northborough, Massachusetts, police department, denied Morin’s application for a permit to purchase on April 4, 2018.

The Supreme Court summarily disposed of the pending case, simultaneously granting the petitioner’s request seeking review while skipping over the oral argument phase at which the merits of the case would have been considered. Some lawyers call this process GVR, which stands for grant, vacate, and remand.

The order came after the Supreme Court issued a series of rulings on June 30 reversing federal appeals court decisions that upheld gun restrictions in California, Hawaii, Maryland, and New Jersey, as The Epoch Times reported.

The Epoch Times reached out for comment to Morin’s attorney, David Jensen, of Beacon, New York, but didn’t receive a reply as of press time.

Chloe Gotsis from the office of Massachusetts Attorney General Maura Healey told The Epoch Times by email, “We are declining to comment on the record as this is ongoing litigation.”

Healey, a Democrat, is running for governor in her state.