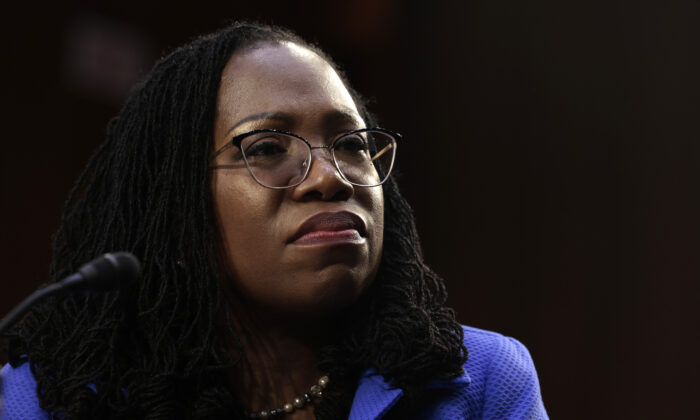 A day after declining to define the word woman, Supreme Court nominee Judge Ketanji Brown Jackson wouldn’t say whether Sen. Ted Cruz (R-Texas) could have standing to sue as a woman.

“Yesterday, under questioning from Sen. [Marsha] Blackburn, you told her that you couldn’t define what a woman is—that you are not a biologist, which I think you’re the only Supreme Court nominee in history who has been unable to answer the question ‘what is a woman,'” Cruz said.

“Let me ask you, as a judge, how would you determine if a plaintiff had Article III standing to challenge a gender-based rule, regulation, policy without being able to determine what a woman was?” he asked.

“Senator, I know I am a woman and Sen. Blackburn is a woman and the woman I admire most in the world is in the room today, my mother,” Jackson responded.

“Under the modern, leftist sensibilities, if I decide right now that I am a woman, then, apparently, I am a woman. Does that mean I would have Article III standing to challenge a gender-based restriction?” Cruz wondered.

“To the extent you are asking me about who has the ability to bring lawsuits based on gender, those kinds of issues are working their way through the courts and I am not able to comment on them,” she said.

Cruz continued by speculating on whether he could claim to be a different race and bring a case based on that race.

“If I can change my gender and be a woman and an hour later if I decide I am not a woman anymore, I guess I would lose Article III standing,” Cruz said. “Does that same principle apply to other protected characteristics? For example, I’m a Hispanic man. Could I decide I was an Asian man? Would I have the ability to be an Asian man and challenge Harvard’s discrimination because I made that decision?”

The Supreme Court has accepted a case brought on behalf of students who allege they were rejected by Harvard University due to being Asian.

Jackson declined to say whether Cruz could identify as another race for legal purposes.

“I am not able to answer your question. You are asking me about hypotheticals,” she said.

“I would assess standing the way I assess other legal issues which is to listen to the arguments made by the parties, consider the relevant precedents and constitutional principles involved, and make a determination,” she added.

Jackson also said during day 3 of her confirmation hearings that she never said she wasn’t sure what a woman is but that the definition “depends on the circumstances.”

Cruz later appeared on Fox News, where he said he would not vote for Jackson in part because of her refusal to define what a woman is.

“I think the overwhelming majority of Republicans will vote against her. I think her record is far out of the mainstream. You may see a couple of Republicans vote for her. And listen, it’s a historic nomination. If she’s confirmed, she’ll be the first African American woman on the court. That’s an inspirational thing,” Cruz said. “That being said, our responsibility under the Constitution is advise and consent. And we ought to demand a justice who will defend our constitutional rights: free speech, religious liberty, the 2nd Amendment. There’s no indication she’d do that.”