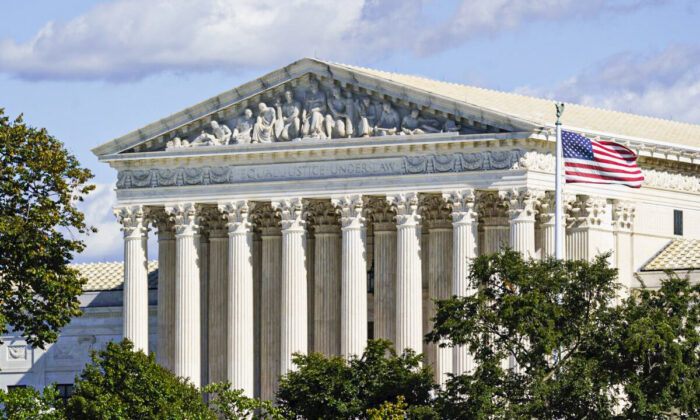 The Supreme Court is seen in Washington, in a file photograph. (J. Scott Applewhite/AP Photo)
US News

The Supreme Court on Friday ruled that a challenge to an abortion ban in Texas can move forward, though justices said the law can remain in place for now.

Texas in September imposed one of the strictest bans in the nation, prohibiting abortions in many cases after an unborn baby’s heartbeat is detected.

Abortion clinics in the state sued over the law, arguing it violates the U.S. Constitution.

The challenge will survive an attempt to dismiss it, Justice Neil Gorsuch, a Trump nominee, said in a majority opinion (pdf) on Friday, about a month after the court heard arguments from both sides.

However, Gorsuch also said the case would only proceed against certain defendants.

State court clerk Penny Clarkston and state Judge Austin Jackson should be dismissed because the legal avenue being used by the clinics does not typically include judges or clerks, the decision said.

Texas Attorney General Ken Paxton, a Republican, should also be dismissed because he doesn’t have the ability to enforce the law, Texas Senate Bill 8.

The law contains the unusual provision that state officials cannot enforce it, instead leaving it up to private citizens to sue people accused of violating it.

Mark Lee Dickson, the only private person named as a defendant, should also be dismissed because he has not filed a suit, Gorsuch said.

The court split on certain matters.

Justice Clarence Thomas, a George H.W. Bush nominee, said in a partial dissent he wouldn’t allow the suit to continue against any of the government respondents, asserting that “there is no freestanding constitutional right to pre-enforcement review in federal court.” Chief Justice John Roberts, a George W. Bush nominee, with whom the three Democrat-nominated justices joined, said in a partial dissent that Paxton should be kept as a defendant, as should the clerk and judge. Justice Sonia Sotomayor—an Obama nominee with whom Justices Stephen Breyer, a Clinton nominee, and Elena Kagan, an Obama nominee, joined—said in a partial dissent that foreclosing action against the clerk, judge, and Paxton was a betrayal of Texans and “our constitutional system of government.”

The Supreme Court previously declined to block the law.

The case will now go back to a district court that ordered the law temporarily blocked but was later overruled by the 5th U.S. Circuit Court of Appeals, which has said the law can remain in place as challenges against it play out.

The same path could be followed, with an eventual return to the nation’s highest court.

The new order came after a state judge, David Peeples, ruled Thursday that the law violated the Texas Constitution.

Peeples noted the “unprecedented” nature of the law’s enforcement provision but said he found it unconstitutionally delegated enforcement power to private persons.

The ruling does not block the law and was going to be appealed by the pro-life Texas Right to Life group.