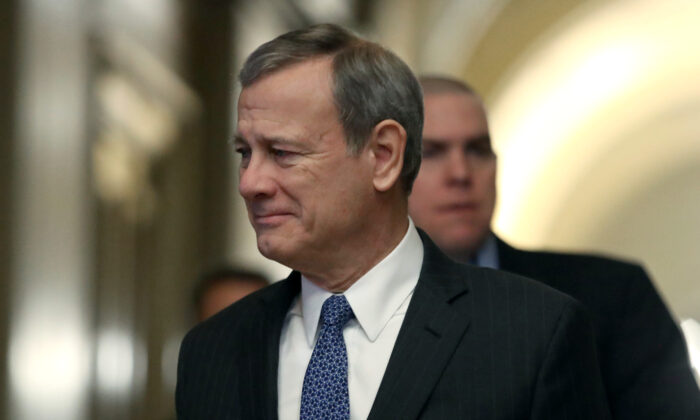 Trump filed an emergency application on Monday to the Supreme Court, asking it to halt the order.

Roberts’ stay is temporary, pending further developments in the case.

Rep. Richard Neal (D-Mass.), chairman of the House Committee on Ways and Means, has for years been trying to obtain Trump’s returns, asserting that they are necessary as the panel considers possibly updating how audits of presidents are done.

Trump said that the true purpose is to release the returns to the public.

Neal is not seeking the records of any other president, and has said that “unraveling President Trump’s sophisticated tax avoidance” was one of the reasons he thought Trump should release his returns.

U.S. House Speaker Nancy Pelosi (D-Calif.), said in 2017 that the returns would “be useful” in investigating “what … the Russians have on Donald Trump” and that investigations into Trump were going to continue in 2019 because she “want[ed] to see him in prison.”

Trump sued the IRS and its parent agency, the Department of Treasury, in 2019 to stop officials from giving his returns to Neal.

U.S. District Judge Trevor McFadden, a Trump appointee, threw out the lawsuit in 2021, finding that federal law “requires great deference to facially valid congressional inquiries” and that the presidential audit program could be subject to legislation.

“That conclusion all but decides the Court’s analysis,” McFadden said, even as statements from Neal and Pelosi “plausibly show mixed motives underlying the” request for the returns.

In August, the U.S. Court of Appeals for the District of Columbia Circuit upheld the ruling. U.S. Circuit Judge David Sentelle, a Reagan appointee writing for the three-judge panel, said the court could not probe the motives of legislators and that Neal “has identified a legitimate legislative purpose that it requires information to accomplish.”

“At this stage, it is not our place to delve deeper than this,” he added.

U.S. Circuit Judge Karen LeCraft Henderson, a George H.W. Bush appointee, offered a concurring opinion in which she diverged from her colleagues on one point.

“Although I agree with my colleagues that the burdens imposed on the Presidency by the Committee’s Request do not rise to the level of a separation-of-powers violation, I conclude that the burdens borne by the Executive Branch are more severe and warrant much closer scrutiny than my colleagues have given them,” she said, adding later that the potential of Congress to threaten a sitting president with a post-presidency request “in order to influence the President while in office should not be dismissed so quickly.”

The same appeals court in October denied a request for a rehearing.

Roberts ordered Neal and other respondents, including the IRS, to respond to Trump’s application on or before Nov. 10 by noon.

A spokesperson for Neal did not immediately respond to a request for comment.

Roberts received the application because he oversees the District of Columbia appeals court.

Roberts can decide on the application himself or refer the matter to the full Supreme Court.