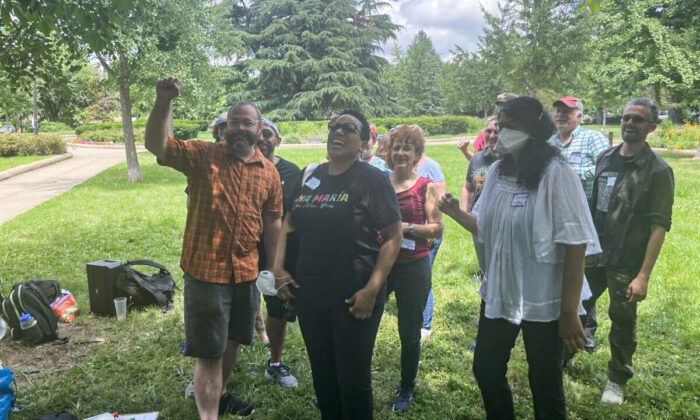 WASHINGTON—As officials in Washington brace for possible violence following a Supreme Court decision about access to abortion, organizers of a group planning protests at the high court told followers not to oppose the use of violence.

Leaders of the group “Shut Down DC” stated at an organizing meeting at Petworth United Methodist Church in Washington on June 12 that violence runs counterproductive to the group’s strategy, but isn’t necessarily bad.

Shut Down DC plans to blockade the U.S. Supreme Court building on June 13 so that justices cannot enter. The activist group is protesting in response to a leaked high court draft opinion that suggests the court plans to overturn Roe v. Wade.

The court said last week that it’s planning to issue decisions on June 13 and 15, without being more specific.

The remark was made in the context of a training day, during which organizers explained to protesters what to do if people showed up and encouraged violence, among other scenarios.

“If you want to do property destruction, do it in secret. If you’re doing it publicly, you’re probably an infiltrator,” Bloch said. “There’s no condemnation of bringing the system down.”

Another activist, who identified herself as Sadie, said that protest “action groups” can split into “red teams” and “green teams” if violence starts. The “red teams” could start violence, while the “green team” could provide cover and be “eyes and ears” on the “red team,” she said.

Shut Down DC’s main organizer, Patrick Young, suggested that people go and start violence away from the main body of the group.

“Y’all should go somewhere else and do that,” he said.

One of the activists, a man who called himself Rusty, said that he has stolen banners from politicians and that the group will repaint them to use in the protest.

“If anybody needs a banner, like a nice heavy-duty banner, I’ve been stealing politicians’ banners from all over town,” he said. “They’ve got white backs, you can spray paint whatever you want on. I’ve probably gotten, like, 10 of them.”

None of the activists at the meeting called him out for acknowledging the thefts.

Washington authorities have said that they are stepping up the city’s police presence and are urging visitors not to bring guns.

“We are increasing our presence to have coverage in neighborhoods and our downtown areas, which includes the activation of civil disturbance unit platoons,” Metropolitan Police Chief Robert Contee said at a press conference. “In addition, we are working closely with our law enforcement, government, and community partners to ensure that all of these events are peaceful and our neighborhoods are safe.”

The FBI has also said it will not “tolerate violence, destruction, interference with government functions, or trespassing on government property.”

The activist group at the church included 17 activists; leaders said they expected hundreds of people to show up on June 13 to block the entrances to the U.S. Supreme Court building.

Activist Hope Neyer told the group that the history of pro-abortion movements is too white and too woman-focused. She said pro-abortion groups now need to include women who claim to be men by dropping language about “women’s rights.”

The activists planned to meet at 7 a.m. at Stanton Park, then march down Maryland Avenue to the high court’s building.

Activists at the meeting also discussed how to draw media attention.

“If you’re being dragged away, who’s going to watch?” one of the activists said. “The press. The media. Everyone here needs to have a sound bite. You have a chance to talk to the nation seriously.”

The 17 protesters practiced marching in the park outside the church. Some pretended to be “police” and attempted to “arrest” marchers and prevent them from passing through the park. Others practiced marching around police lines, or sitting with linked arms to resist arrest, and responding to police attempts to carry them away by going limp.

In every exercise, the mock-up “police” successfully prevented activists from nearing their destination.

Bloch advised protesters to consider wearing adult diapers so they could relieve themselves without leaving the Supreme Court.

Many of the protesters said they planned to stay until 5 .p.m. in hopes that more people would join the protest after work.