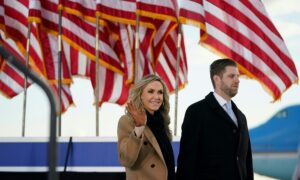 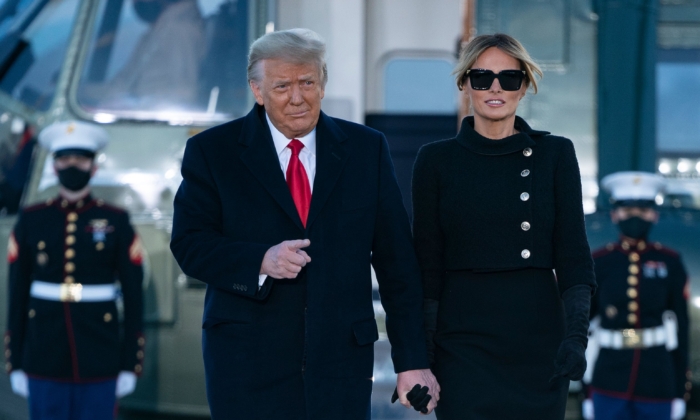 President Donald Trump and First Lady Melania Trump step out of Marine One at Joint Base Andrews in Maryland on Jan. 20, 2021. (Alex Edelman/AFP via Getty Images)
Politics

The U.S. Supreme Court ruled on Feb. 22 that it won’t stop a New York prosecutor from obtaining former President Donald Trump’s tax returns and other financial records as part of a criminal investigation.

The justices rebuffed Trump’s request to put on hold an Oct. 7, 2020, lower court ruling that directs the former commander-in-chief’s accounting company, Mazars USA, to comply with a subpoena to turn over the tax returns and documents to a grand jury convened by Manhattan District Attorney Cyrus Vance, a Democrat.

The New York grand jury will be able to obtain the records and look at them in secret, meaning that the records will not become public any time soon, although the possibility of leaks to news media outlets can’t be ruled out.

The court issued a single-sentence ruling (pdf): “The application for a stay presented to Justice Breyer and referred to the Court is denied.” The justices didn’t provide an explanation.

In July 2020, the high court ruled that the president and any other citizen isn’t “categorically above the common duty to produce evidence when called upon in a criminal proceeding.” They suggested Trump could challenge Vance’s subpoena on other grounds.

Last year, Trump’s lawyers said the attempt to review his taxes was done in bad faith and was excessive. The Supreme Court also tossed the former president’s claim of “absolute immunity.”

Trump’s attorneys had also told the Supreme Court that he would suffer “irreparable harm” if the materials were turned over to the grand jury.

“Even if the disclosure of his papers is limited to prosecutors and grand jurors, the status quo can never be restored once confidentiality is destroyed,” his lawyers stated in court papers in October 2020.

“Interim relief is also warranted given the irreparable harm the President will suffer without a stay,” they wrote in their 46-page appeal.

But Vance previously said the delay has hampered his investigation.

The former commander-in-chief “has had multiple opportunities for review of his constitutional and state law claims, and at this juncture, he provides no grounds for further delay,” Vance said around the same time. “His request for extraordinary relief should be denied, and the grand jury permitted to do its work.”

Vance’s subpoenas span from January 2011 until August 2019, relating to the Trump Organization’s employment of his former attorney, Michael Cohen.

Mazars USA has said it isn’t contesting the subpoena and will comply with legal obligations.

Officials at Trump’s Save America PAC didn’t immediately respond to a request by The Epoch Times for comment.