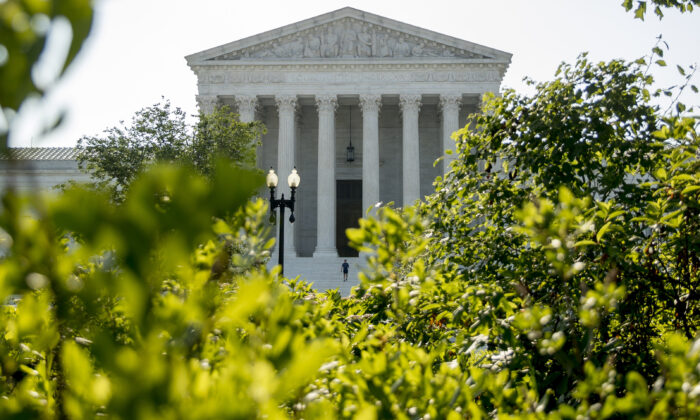 The Supreme Court in Washington on July 8, 2020. (Andrew Harnik/AP Photo)
By Matthew Vadum

The Supreme Court agreed to review a First Amendment lawsuit in which a Georgia college belatedly expanded free speech on campus after a Christian student ran afoul of its constitutionally suspect campus “speech zone” policy.

The court granted a petition for certiorari July 9 in a case known as Uzuegbunam v. Preczewski. According to its practice, the Supreme Court provided no reasons for its decision.

Chike Uzuegbunam, a student at Georgia Gwinnett College, a public college in Lawrenceville, Georgia, was present on campus in 2016 handing out literature and sharing his Christian beliefs when a college official stopped him, informing him that he was breaking the rules by not speaking within the boundaries of an approved campus “speech zone,” according to a fact summary provided by his lawyers at the Scottsdale, Arizona-based Alliance Defending Freedom (ADF).

“Open only about 10% of the week, the zones comprised one patio and one sidewalk—the size of a legal pad on a football field compared to the entire campus. To speak their views at all other times or places, students had to obtain a permit. Even to use the zones, students had to obtain a reservation by submitting a form and any leaflets in advance, and four officials would then decide, with no criteria to guide them, whether to allow it,” the summary stated.

Uzuegbunam went through the permitting process. He spoke a second time and believed he was complying with campus rules. Someone reportedly complained to campus security and within minutes of beginning his talk, Uzuegbunam was again confronted by college officials. They accused him of “disorderly conduct,” which they defined as any expression that “disturbs the peace and/or comfort of person(s).”

This effectively left Uzuegbunam without a voice on campus, according to ADF.

Lacking a speech permit, he wasn’t allowed to speak in the 99.99 percent of campus situated outside the speech zones. Even if he were to reserve time in one of the approved speech zones, he would only be allowed to say things that didn’t make anyone uncomfortable, a task that ADF says is both impossible and incompatible with the free-speech protections of the First Amendment.

Georgia Gwinnett College eventually modified its student speech policies after a lawsuit was filed against it on behalf of Uzuegbunam and another student, Joseph Bradford. The college decided to allow for speech in any outdoor area of campus. This policy change and the fact that as time wore on Uzuegbunam graduated from the college, led a federal district court to dismiss the case, a ruling that was upheld by the 11th Circuit Court of Appeals.

“But the fact remains that college officials violated Chike’s right to free speech—twice!” ADF said in a statement after the high court agreed to consider the case.

“Yet they did nothing to compensate him for this. The government should not be able to violate someone’s rights and then walk away as if nothing at all had happened. That’s why Chike asked the U.S. Supreme Court to hear his case. The Court needs to make it clear that colleges cannot violate a student’s rights, then simply amend their unconstitutional policies after getting sued to avoid the consequences.”

Uzuegbunam’s lawyer argued in the petition filed Jan. 31 that the court needed to intervene in the case because the rulings of various circuits within the U.S. Court of Appeals system regarding nominal-damages claims conflict.

It is the position of six circuits that when a government changes a policy, doing so doesn’t moot the damages claims. Two circuits hold that such claims are mooted if the government modifies a policy it has never enforced against the plaintiff.

However, the Atlanta-based 11th Circuit alone holds that, in the words of the petition, “absent compensatory damages, government officials are never liable for violating constitutional rights if they change their policy after being sued.”

Andrew Alan Pinson, Georgia’s solicitor general, was listed in Supreme Court files as counsel of record for the respondent in Uzuegbunam v. Preczewski.

Pinson didn’t immediately respond to a request by The Epoch Times for comment.