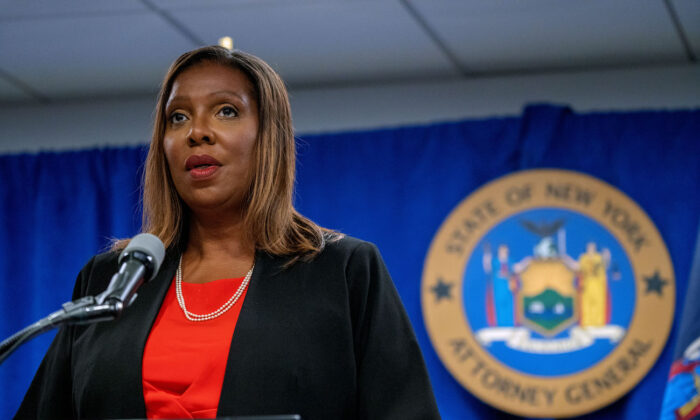 The Supreme Court on Jan. 18 turned away an emergency request from firearms dealers to halt a months-old New York law that imposed new restrictions on gun purchases and dealers that the dealers say adversely affected sales and violated their rights.

The ruling comes as challenges to gun laws across the nation have escalated since the high court struck down previous New York rules on guns in June 2022. In the same opinion, the court also held that there’s a constitutional right to carry a gun outside the home for self-defense, leading states such as New York and Illinois to respond by doubling down on firearms restrictions.

The new state law in question, New York’s sweeping Concealed Carry Improvement Act, has been hotly litigated in the federal courts since it was approved by lawmakers in Albany. Some state law enforcement officials previously condemned the law, which took effect on Sept. 1, 2022, saying it would be difficult to enforce and may be unconstitutional. The New York State Sheriffs’ Association said the law was a “thoughtless, reactionary action.”

The Supreme Court rejected the application in Gazzola v. Hochul, court file 22A591, in an unsigned order (pdf) on Jan. 18. No justices dissented from the order.

The dealers said in court papers (pdf) that the new law treats “state licensed dealers in firearms as if they are ‘a highly selective group inherently suspect of criminal activities.’” The dealers said they were “urgently [seeking] a preliminary injunction to keep their doors open, while fighting to restore their civil rights through this lawsuit.”

“Petitioners are risking everything to try to stay in business in support of civil rights under the Second, Fifth, and Fourteenth Amendments, and to keep the doors open and the lights on while they pursue this case, but we can’t seem to find a judge in district or circuit court who will back them up,” they said in the brief.

One of the dealers’ complaints was that New York was making what they characterized as an unprecedented demand that all federally licensed firearms dealers and New York state-licensed dealers “surrender their federal firearms compliance records” on pain of “incarceration and license revocation.”

The decision came after the Supreme Court similarly declined to block the New York law in an order on Jan. 11 in Antonyuk v. Nigrelli, which was brought by New York residents. Despite turning down the request to stay a ruling by the U.S. Court of Appeals for the 2nd Circuit reinstating the law, Justice Samuel Alito issued a statement, joined by Justice Clarence Thomas, suggesting this wasn’t the high court’s final word on the matter.

“The New York law at issue in this application presents novel and serious questions under both the First and the Second Amendments,” Alito wrote (pdf).

The justice encouraged the Second Amendment advocates involved in the lawsuit to continue fighting the law.

“Applicants should not be deterred by today’s order from again seeking relief if the Second Circuit does not, within a reasonable time, provide an explanation for its stay order or expedite consideration of the appeal,” Alito wrote.

Before the Supreme Court acted on Jan. 11, the 2nd Circuit stayed an order by Syracuse-based U.S. District Judge Glenn Suddaby, who blocked sections of the law on Nov. 7, 2022, in a case brought by Gun Owners of America. The law imposed “unprecedented constitutional violations,” Suddaby wrote.

Suddaby enjoined the new requirement that a carry applicant demonstrate “good moral character” and produce the names and contact information of spouses and other adults in the applicant’s home. He blocked the rule forcing applicants to submit social media accounts for review by government officials.

Suddaby also enjoined the restrictions on carrying in public parks, zoos, places of worship, locations where alcohol is served, theaters, banquet halls, conferences, airports and buses, and lawful protests and assemblies, as well as the blanket ban on carrying on private property without the consent of the owner.

New York’s Concealed Carry Improvement Act was rushed through the state legislature in the summer of 2022 and signed by Democratic Gov. Kathy Hochul after the Supreme Court’s decision in New York State Rifle and Pistol Association v. Bruen invalidated the state’s requirement that a carry permit applicant demonstrate a special need for self-defense.

Hochul denounced the high court ruling at the time, calling it “a reckless decision … senselessly sending us backward and putting the safety of our residents in jeopardy.”

The dealers’ attorney of record, Paloma Appolonia Capanna, didn’t respond to a request for comment by press time.

“Once again, the U.S. Supreme Court has decided to allow our state’s gun safety laws to remain in effect. We all see the heart-wrenching news from communities throughout New York state about the lives that are lost to senseless gun violence,” James said.

“We know that gun safety laws help save lives, and keep our state safer. My office will continue to work tirelessly to stand up for New York’s gun safety laws and we will use every tool at our disposal to protect New Yorkers.”