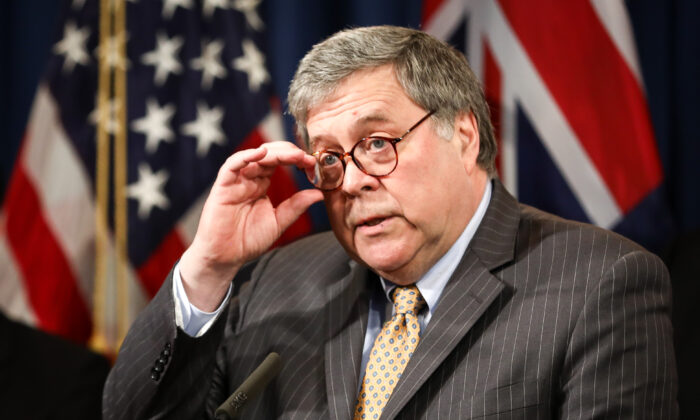 The widespread action against stories on emails and other material from a laptop believed to be owned by President Joe Biden’s son impacted the 2020 election, former Attorney General William Barr said on March 17.

After the New York Post reported on the materials, Twitter blocked the circulation of the story and other news outlets cast doubt on the veracity or refused to report on the developments, outlining claims including that the release was part of a Russian disinformation effort or did not matter.

“That definitely made an impact on the election, the suppressing that news,” Barr, who served during the Trump and George H. W. Bush administrations, said on Fox News.

“And it’s not a question of whether it was criminal or not, right. Just the facts alone were shameful. And most Americans would immediately see what was going on and how repulsive it was, and it would have had an effect. The issue of criminality is a different issue.”

A survey done in the wake of the election found 17 percent of Biden voters would not have voted for him if they were aware of the Hunter Biden story or others like it that were downplayed or ignored by legacy media outlets and Big Tech.

Twitter executives later said they made a mistake in labeling the Post story as being based on hacked materials and shouldn’t have halted its circulation. Some news outlets are drastically changing their reporting on the laptop materials; the New York Times, one of the outlets to push the Russian disinformation angle, reported this week that it had authenticated the materials.

The Post said it obtained a copy of the laptop’s hard drive from former President Donald Trump’s lawyer Rudy Giuliani and provided materials showing the FBI seized the computer. Hunter Biden has avoided answering direct questions about the laptop and White House press secretary Jen Psaki, which claimed in 2020 that Russians appeared to be involved, declined on Thursday to address the new reporting.

Psaki was among those pushing a letter offered by a group of former intelligence officials, including former Director of National Intelligence James Clapper, that said the timing of the release and other factors pointed to a Russian effort to influence the 2020 election. The first report was published about two months before voters went to polls.

John Ratcliffe, the director of national intelligence (DNI) at the time, said the intelligence community had obtained “no intelligence” that supported the Russian disinformation notion and the FBI said it had nothing to add to Ratcliffe’s statement.

“As soon as this letter came out from these so-called intelligence specialists, the DNI, John Radcliffe at the time, and the FBI, which worked for me, both came out and said this was not the result of disinformation, Russian disinformation,” Barr said on Thursday. “The media ignored that completely, just kept on going with the disinformation line.”

Nick Shapiro, who once worked as a top aide to John Brennan when Brennan headed the CIA, and who provided the letter in question to news outlets, did not respond to a request for comment.

Richard Grenell, the acting DNI under Trump at one time, said that in light of recent developments, Republicans need to hold hearings with all the officials who signed the letter if the party flips control of Congress in the upcoming midterm elections.

“They all said Hunter Biden’s laptop was Russian disinformation. And they didn’t have a single piece of intel to suggest it,” he wrote on Twitter. “Hold people accountable for manipulating intelligence for political gain!”