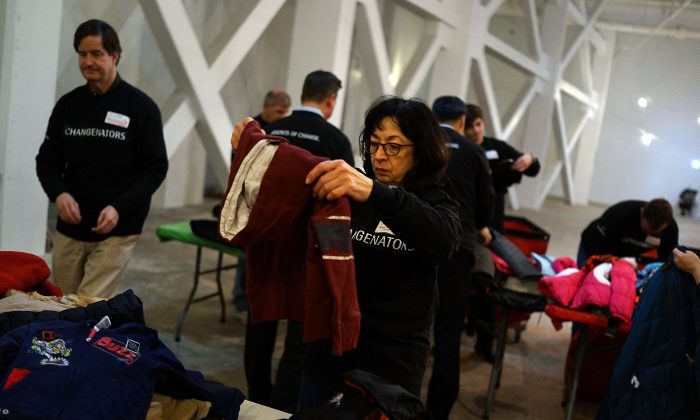 NEW YORK—The need for winter coats is up by 25 percent this year, but the supply is down by 35 percent.

Groups serving the needy have requested 101,000 coats to distribute this season, according to New York Cares, which runs the coat drive. But the drive has only collected 13,000 coats so far.

On Dec. 4, New York Cares distributed 750 coats at the Far Rockaway Library. There was still a line of people wrapped around the block waiting, when the coats ran out.

Bagley believes the increase in need this year is partly from those still pulling their lives back together after Hurricane Sandy. The mild fall weather could also mean that people pulled their coats out of the closet later.

Now that the cold weather has set in for a few weeks, he expects people will remember those with no winter coats and donate.

In 2011, the Midtown basement warehouse the group uses for its coat drive was piled 10 feet high with tens of thousands of sorted coats by early January. Instead, this year only about a thousand coats sit against one wall, ready to go out to community groups that distribute them.

Short supply and high demand led New York Cares to sound the alarm that donations are needed. On Friday, Gov. Andrew Cuomo announced that the MTA and the Port Authority would set up additional drop-off locations and urged New Yorkers to give.

Faith-based groups, youth groups, and companies also hold drives that help bring in coats. Some 500 teams join in to help collect coats, but the numbers dipped this year. But if people want to get involved, “There’s still time!” said Bagley.

Tens of thousands of people are in need of a new winter coat every year. Most children outgrow their coats in one season. For a family with limited resources, buying new coats for their children is an added financial burden. Meanwhile, without a coat a child may not be able to make the journey to school, said Bagley.

The homeless, with no place to store a coat during warm weather, also often need a new coat each year.

Coats can be dropped off at any police precinct round the clock. Precincts collect half of all the coats every winter. Staff and volunteers now collect coats between 7 a.m. and 9 a.m. at Penn and Grand Central stations. A map of drop-off locations is available at newyorkcares.org.

No matter how well the drive goes, there is always need for more coats for children and infants, as well as extra-large men’s coats.

Now in its 25th year, the drive has given out 1.5 million coats.