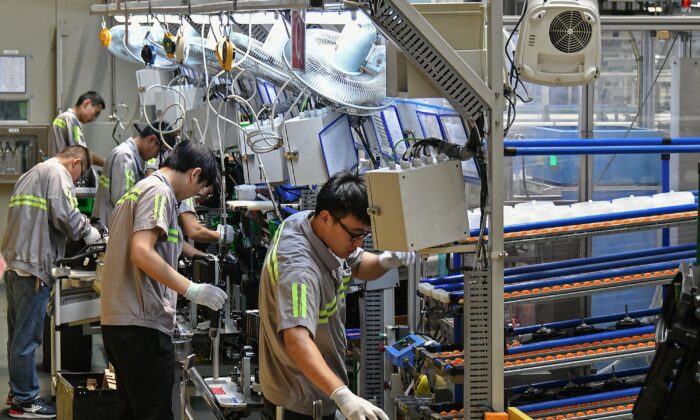 Employees work on an automobile air conditioning production line at a factory in Yantai in China's eastern Shandong Province on May 15, 2019. (STR/AFP via Getty Images)
Hong Kong

According to the Financial Times, the head of the Confederation of British Industry (CBI) had revealed that thousands of British companies are planning to cut economic ties with China.

Tony Danker, Director-General of the CBI, said UK businesses expect relations between Beijing and the West to deteriorate further, with many British companies accelerating their efforts to shift business from China to other countries.

“Every company I talk to at the moment is engaged in rethinking their supply chains,” he said. “Because they anticipate our politicians will inevitably accelerate towards a decoupled world from China.”

Danker said that if the West cut ties with China, Britain would need to find new trading partners and re-engage with old ones, such as EU countries.

“If the political and security experts are right, we are all going to need to be good friends again,” he said.

At present, the two contenders in the contest to become the new British prime minister, British Foreign Secretary Liz Truss and former Chancellor of the Exchequer Rishi Sunak, are both vying to show their tough stance on the CCP, showing that Britain’s attitude toward the CCP is undergoing a dramatic change.

He warned that removing China from our corporate supply chains could lead to inflation. However, it would “redefine the trading strategy for Britain.”

Danker pointed out that in the future, “it’ll be no longer who we sell to but where we source from.”

There are signs that many Western firms are trying to cut ties with China. And because of the uncertainty due to increasing geopolitical risks, global investors have become more and more hesitant to invest in China too.

For example, on July 28, Carlos Tavares, CEO of Stellantis NV, said that the group had closed its only jeep manufacturing plant in China.

One reason for that decision is the increasing political meddling by local Chinese government officials in the Chinese auto market. Tavares also expressed concern that the escalating tensions between China and other countries worldwide could lead to economic sanctions.

“We have been seeing more and more political interference in the world of business in China over the last few years,” Tavares said. “We don’t want to be a victim of cross-sanctions as has been the case for other companies in other regions of the world recently,” he added.