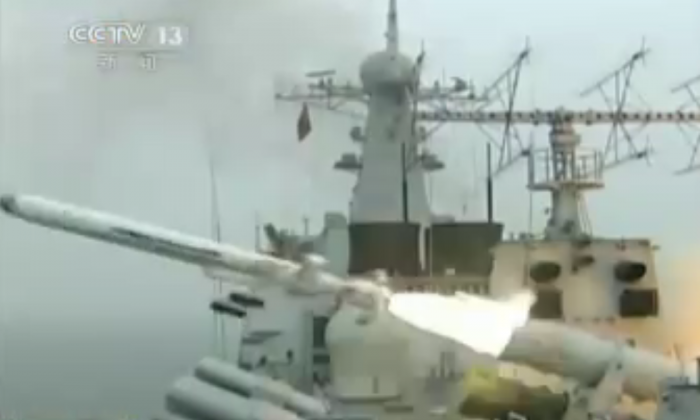 The CCTV video shows several launches of what it alleges are the CX-1 missiles, including vertical and horizontal launches. The video also shows the missiles arc, then move to strike their targets horizontally.

Launch cycles shown in the video appear to line up with military advertisements for the Chinese CX-1. The missiles seen in video stills from the test also seem accurate when compared to images of the CX-1 shown on military websites.

The CX-1 is meant to target small, medium, and large ships as well as land-based targets, according to Chinese Military Review.

Only a handful of countries have supersonic cruise missiles, including the United States, Russia, and India.

The U.S. GM-123 Skipper II has a maximum speed of 680 miles-per-hour, yet most U.S. anti-ship missiles are subsonic, with speeds between 530 and 550 miles-per-hour. Defense analysts are comparing the CX-1 to the BrahMos ramjet supersonic cruise missile developed by Russia and India.

China uses anti-ship missiles in its anti-access/area-denial (A2/AD) strategy which uses short-range ballistic and cruise missiles to deter foreign intervention in China’s military ambitions. The strategy would allegedly come into play if China were to attack Taiwan or another nearby country.

The United States is using its Air-Sea Battle Concept to counter China’s A2/AD strategy. As part of the strategy, the United States has shifted naval forces to the Asia-Pacific region.

The Chinese regime allegedly ran the second test of a hypersonic missile on Aug. 7 at a missile facility in western China. The tests allegedly hit speeds of 7,680 miles per hour, with missiles that can strike any place on earth within around an hour and a half.

Note: This article was updated with a correction. It originally stated that a missile travelling at 7,680 miles per hour could strike any place on earth in 30 minutes. It should be around an hour and a half. Epoch Times regrets the mistake.