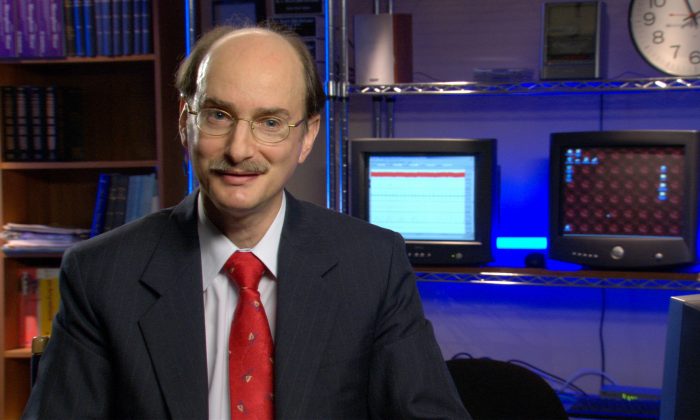 Dr. Dean Radin, during an interview for the movie “What the Bleep do we Know?” (Courtesy of Dean Radin)

Meditation is becoming more common in the West. When Transcendental Meditation gained popularity in the ’60s and ’70s, it was still a little “out there” for mainstream America. But nowadays even many hospitals offer meditation as a treatment option for some patients, because the research shows it is beneficial.

But the long tradition of meditation in the East is about more than sitting still and clearing the mind. It doesn’t just ease stress and promote health. It generates supernormal abilities.

In the West, whether we like to admit it or not, most of us believe in the supernormal.

Radin described a survey IONS conducted. They asked 2,000 people who meditate, “Have you ever had experiences of the following type?” A long list followed, including clairvoyance, precognition, and similar “psychic” phenomena.

About 75 percent of the meditators reported that they had these types of experiences. They felt the experiences arose as a result of meditation.

“As more and more people meditate for physical or mental health reasons, they’re going to start encountering these kinds of phenomena and, in many ways, that’s why I wrote the book, ‘Supernormal,'” Radin said.

“Supernormal: Science, yoga, and the evidence for extraordinary psychic abilities,” was published in 2013. It reviews a broad swath of scientific studies related to psi (Psi refers to any psychic phenomenon, such as psychokinesis, telepathy, or clairvoyance).

Radin was raised agnostic, and he still views meditation as a secular practice, but he gives an ear to the mystics.

In the West, whether we like to admit it or not, most of us believe in the supernormal.

For example, a 2001 Gallup poll found that three in four Americans believes in the paranormal. A 2007 poll conducted by the Pew Forum on Religion and Public Life asked 35,000 Americans, “Do you believe in miracles?” About 80 percent answered “yes.” Even among those without religious affiliations, 55 percent said they believe in miracles.

We’re fascinated by the supernormal, but the academic world refuses to look at it seriously.

Radin pointed out that less than 1 percent of universities around the world have a faculty member known for studying psi. Even religious studies professors generally refuse to look at “miracles” as real.

Hollywood provides our main outlet for this fascination.

“There’s still an enormous amount of fear associated with these phenomena because of how they’re portrayed in Hollywood, usually in the horror genre,” Radin said. “The irony is that you can get a Ph.D. dissertation on the ‘Hermeneutics of Buffy the Vampire Slayer,’ but you can’t if you want to study telepathy.”

He said we may be seeing an echo of the witch trials in the fear-based approach to supernormal phenomena. Those trials went on for some 500 years and left their mark on our psyches. “If someone has witch-like characteristics … they have traditionally been considered scary at best and evil at worst,” he said.

But academia is coming around. The U.K. is currently the hub for studying psi, with a dozen university-based programs that are sympathetic to studying psi effects.

Twenty years ago it was “almost impossible” to publish psi research in mainstream journals, Radin said. “Now we can and we are publishing an increasing number of psi-research articles in mainstream journals. One of our recent articles is in an online journal called Frontiers in Neuroscience … and most of our physics-oriented research is now published in physics journals.”

We are publishing an increasing number of psi-research articles in mainstream journals.
— Dean Radin, chief scientist, Institute of Noetic Sciences

Radin pointed out that students today become familiar with the strangeness of quantum mechanics early in life. This helps the younger generation of scientists be more open to exploring phenomena like non-local entanglement, a property that transcends the classical boundaries of space and time.

This shift in perspective about what the physical world allows is important because psi effects are considered strange for one main reason—they too transcend the ordinary constraints of space and time.

Scientific American and other mainstream journals are now exploring subjects like quantum biology, which suggests that entanglement, called “spooky action at a distance” by Albert Einstein, may also exist at the macro-level of human beings (and not just at the micro-level of subatomic particles).

In “Supernormal,” Radin quoted British psychologist and skeptic Richard Wiseman, who told the Daily Mail, “By the standards of any other area of science, remote viewing is proven.”

A prominent skeptic of all things psychic … admitted that he believes psychic functioning has been scientifically proven.
— Dean Radin, chief scientist, Institute of Noetic Sciences

Radin added: “The import of this statement cannot be overstated. A prominent skeptic of all things psychic … admitted that he believes psychic functioning has been scientifically proven. He later clarified that he meant to say not just remote viewing (i.e. clairvoyance) was proven, but that all psi phenomena ‘meet the usual standards for a normal claim,’ and are thus proven by scientific standards.”

But many skeptics hold that extraordinary claims require extraordinary evidence. As the meditation traditions of the East continue to spread to the West, we may find “The meaning of extraordinary is in the eye of the beholder.”

Radin explained in his book: “For a Western-trained academic, the mere existence of, say, telepathy would be considered supernormal and thus wildly extraordinary. But for an experienced yogi, it’s just a boringly normal minor siddhi [a Sanskrit term for a meditation attainment, or power]. A skeptical scientist, not having the benefit of thousands of hours of practice in yoga and meditation, would require repeatable, rigorously obtained experimental data showing odds against chance of a gazillion to one. The yogi merely requires his own experience.”