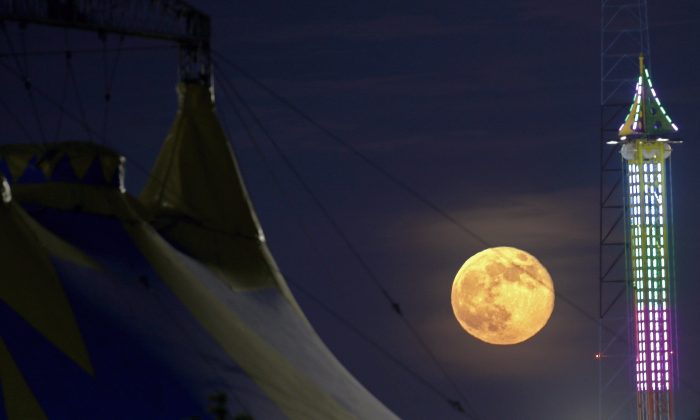 The moon rises between a tent, left, and a ride at State Fair Meadowlands, Sunday, June 23, 2013, in East Rutherford, N.J. The so-called supermoon appeared up to 14 percent larger than normal this weekend as our celestial neighbor swung closer to Earth, reaching its closest distance early Sunday morning. (AP Photo/Julio Cortez)
Science

Supermoon 2014 Dates: When is the Next Supermoon? And What is It?

Two supermoons have already passed in 2014 but one is coming up.

Those two happened in January; the next one is slated for July 12.

These supermoons don’t typically impact the Earth in any big ways, though they usually bring higher tides. Perigee new moons, or perigee full moons, elevate the tides even more than normal supermoons, according to EarthSky.

“Each month, on the day of the new moon, the Earth, moon and sun are aligned, with the moon in between. This line-up creates wide-ranging tides, known as spring tides. High spring tides climb up especially high, and on the same day low tides plunge especially low,” it reports.

The other supermoons this year are forecasted to happen on July 12, August 10, and September 9.

The one is August is supposed to be the closet to Earth.