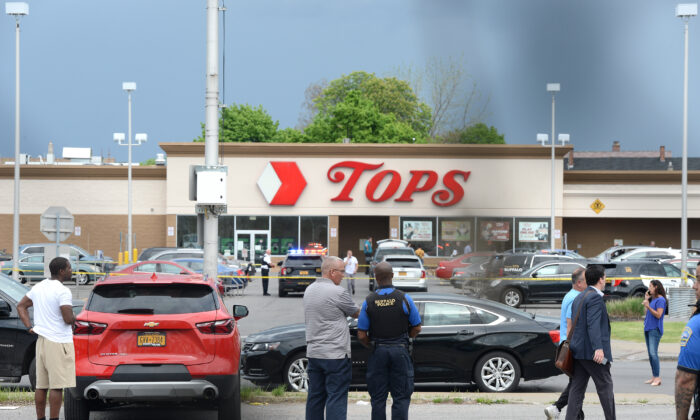 Police on scene at a Tops Friendly Market after a mass shooting at the store in Buffalo, N.Y., on May 14, 2022. (John Normile/Getty Images)
By Jack Phillips

The suspect who allegedly shot and killed 10 people and injured three more at a Buffalo, New York, supermarket on May 14 may have planned the attack for months, officials said on May 15, while a manifesto that was apparently written by the man stated that he chose Buffalo because of the state’s stringent gun laws and that he used an illegally modified rifle to carry out the attack.

Authorities claimed the man, 18-year-old Payton Gendron, penned a 180-page manifesto, which was posted online. Officials told media outlets that the manifesto detailed his desire to attack the Tops Friendly Markets and that he drove there from several counties away.

“This defendant is accused of traveling to our area and targeting innocent people who were shopping for their groceries on a Saturday afternoon. I continue to pray for all affected by this horrific crime,” Erie County District Attorney John Flynn said in a statement. “I am committed to obtaining justice for the victims, their families, and this community.

“My office is working closely with the U.S. Attorney’s Office and our partners in law enforcement into potential terrorism and hate crimes. This is an active investigation and additional charges may be filed.”

In the alleged manifesto, the author appears to claim that he chose Buffalo because of the strict gun control laws, because it has a high “black population percentage,” and because it “isn’t that far away” from where he had lived. The Epoch Times couldn’t confirm whether the manifesto was written by Gendron. The Epoch Times has contacted Flynn’s office for comment.

New York state “has heavy gun laws so it would ease me if I knew that any legally armed civilian was limited to 10 round magazines or cucked firearms,” the author wrote, likely referring to New York laws restricting magazines to only 10 rounds and laws that limit the purchase of certain types of semi-automatic rifles.

New York state residents also need to obtain a permit, which can make it take months if not years, to buy a pistol under the provisions of the SAFE Act.

“Won’t your attack result in calls for the removal of gun rights in the United States?” the author rhetorically asked himself. “Yes, that is the plan all along, you said you would fight to protect your rights and the constitution, soon will come the time.

The individual also wrote that he obtained a Bushmaster XM-15.

“Since I live in New York, I had to buy a cucked version of this before illegally modifying it,” he said.

The author also identified himself as a white supremacist. In the alleged manifesto, it included statements such as “conservatism is corporatism in disguise, I want no part of it.”

He also wrote, “When I was 12 I was deep into communist ideology, talk to anyone from my old high school and ask about me and you will hear that. From age 15 to 18, however, I consistently moved farther to the right. On the political compass, I fall in the mild-moderate authoritarian left category, and I would prefer to be called a populist.”

The apparent manifesto includes Gendron’s name, the same birthdate as his, and biographical details in common with the suspect and was posted on Google Docs on May 12.

In a statement, Attorney General Merrick Garland said the Department of Justice “is investigating this matter as a hate crime and an act of racially-motivated violent extremism.”

“The Justice Department is committed to conducting a thorough and expeditious investigation into this shooting and to seeking justice for these innocent victims,” Garland said.

“Tonight, we grieve for the families of ten people whose lives were senselessly taken and everyone who is suffering the physical and emotional wounds of this horrific shooting,” a White House statement reads. “We are grateful for the bravery of members of law enforcement and other first responders who took immediate action to try to protect and save lives. The First Lady and I are praying for the victims and their families, and hearts all across this country are with the people of Buffalo.”