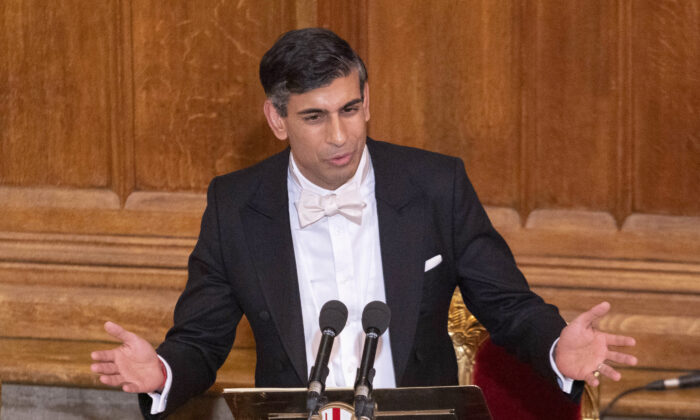 The so-called “golden era” of the Sino–British relationship is over, the UK’s Prime Minister Rishi Sunak said on Monday.

But Sunak dismissed what he said is “simplistic Cold War rhetoric,” saying he will stand up to the UK’s competitors with “robust pragmatism” instead of “grand rhetoric.”

Giving his first major foreign policy speech at the annual Lord Mayor’s Banquet at Guildhall in London, Sunak also vowed to “stand with Ukraine for as long as it takes,” promising to maintain or increase military support next year.

But the speech heavily focused on the communist-ruled China, which he said is “conspicuously competing for global influence using all the levers of state power.”

“Let’s be clear. The so-called golden era is over, along with a naive idea that trade would automatically lead to social and political reform,” Sunak said, adding, “But nor should we rely on simplistic Cold War rhetoric.”

The prime minister said he recognises the authoritarian regime poses “a systemic challenge to our values and interests,” citing the suppression of anti-zero-COVID protests and the arrest and beating of a BBC journalist on Sunday.

Sunak spoke against what he called “short termism or wishful thinking,” saying the UK’s adversaries and competitors plan for the long term.

He said the UK will “make an evolutionary leap in our approach,” including strengthening defence of “our values and the openness on which our prosperity depends” and the economy at home, and standing up to competitors “not with grand rhetoric, but with robust pragmatism.”

The prime minister said the government is “reinvigorating” the UK’s European relationships, “taking a longer-term view” on China, strengthening the UK’s resilience and economic security, and building relationships in the Indo–Pacific region.

Citing the government’s recent decision to order a Chinese-owned company to sell the UK’s biggest microchip company it had acquired, as well his recent visit to Indonesia, Sunak said the UK, the United States, Australia, Japan, and many others will “manage the sharpening competition” with diplomacy, engagement, and improving resilience, particularly economic security.

More details will be set out in the government’s updated Integrated Review of Security, Defence, Development, and Foreign Policy, Sunak said.

The speech marks a clear softening of rhetoric since his leadership campaign when he said the Chinese regime poses “the largest threat to Britain and the world’s security and prosperity this century,” and his recent description of the regime as posing the “biggest state-based threat to our economic security.”

It’s also in contrast with his hawkish predecessor Liz Truss, who in April called for a “global NATO” to tackle international threats and warned the Chinese Communist Party against invading Taiwan.

Parts of Sunak’s speech were published earlier on Monday in a press release. Commenting on the prime minister’s approach of “robust pragmatism,” Foreign Affairs Committee Chair Alicia Kearns said she believes the UK should engage with China, but urged Sunak to draw “red lines” in the relationship.

Kearns agrees with a pragmatic approach, she told the BBC, adding engagement should mean “having those tough conversations” and “drawing red lines.”

On Sunday, BBC reporter Edward Lawrence was arrested and allegedly beaten by the Chinese police when he was reporting on protests in Shanghai.

It’s unclear what Sunak’s China policy will look like in practice, but the prime minister’s softened rhetoric was met with sharp criticism from former Conservative Party leader Sir Iain Duncan Smith, who expressed his disappointment in Sunak’s tone towards Beijing.

“No idea if British [government] has any sense of irony, if not, they should,” the China hawk said on Twitter.

“As a BBC journalist was being beaten up reporting protests, the British [government] tied itself in knots trying to explain its’ [sic] policy towards China as Robust Pragmatism, you couldn’t make it up.”

In an interview with Channel 4 News, Duncan Smith said robust pragmatism can mean “anything you want it to mean,” adding, “that sounds to me like getting pretty close to appeasement.”

Pressed on whether he really believes it’s close to appeasement, Duncan Smith replied, ” I am because I think for too long, the free world has turned a blind eye to the abuses and the threats from China.”

Referring to Beijing’s sanctioning of him and other politicians over their criticism of the Chinese Communist Party’s human rights record, Duncan Smith said the Chinese regime will “treat us as weak” unless the UK is “clear and robust.”

“And if they do that, they will do it because they think therefore we will end up appeasing them. And I just feel the road to appeasement we went through in the 1930s—when you learn any lesson at all—is the more you appease dictatorships that impose authority on their people and strip away human rights, the more you drift into dangerous water,” he said.