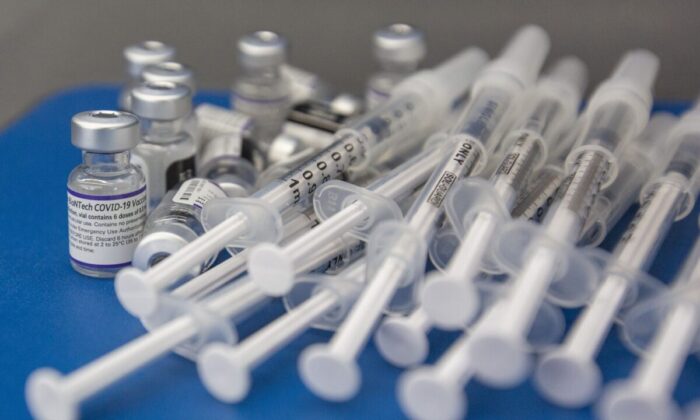 Syringes and vials of Pfizer-BioNTech COVID-19 vaccine are seen on a work surface during a drive-through clinic at St. Lawrence College in Kingston, Ont., on Dec. 18, 2021. (The Canadian Press/Lars Hagberg)
By Margaret Menge

A study published in late August found that 345 people in England died of myocarditis in one year, all vaccinated with one of three COVID-19 vaccines.

The study, conducted from December 2020 to December 2021, looked at deaths after a hospital stay for myocarditis or with myocarditis listed as a cause of death on a death certificate among 42.8 million vaccinated people in England aged 13 and older.

The publication of the study’s findings in the American Heart Association’s journal, Circulation, marked the first time in medical literature that researchers have confirmed that myocarditis associated with one of the COVID-19 vaccines can result in death. The article was published online on Aug. 22 and appears in the journal’s Sept. 5 issue.

“This is really big, to talk about deaths. CDC [Centers for Disease Control and Prevention] keeps saying, ‘generally mild, generally mild,'” cardiologist Sanjay Verma, who wasn’t involved in the research, told The Epoch Times. “There’s been a concerted campaign to emphasize that people have not died from myocarditis and that it’s generally mild.”

Myocarditis is defined as inflammation of the myocardium, the middle layer of the heart muscle. Although the CDC has acknowledged since the spring of 2021 that myocarditis is a possible side effect of the Pfizer-BioNTech and Moderna vaccines, the agency hasn’t publicly spoken about death as a possible outcome of myocarditis.

The authors of the study reviewed patient data pulled from the national health database for all those in England aged 13 and older who received at least one dose of one of three vaccines available in the country: AstraZeneca, Pfizer-BioNTech, and Moderna.

For the AstraZeneca vaccine, 40 people died of myocarditis after the first dose and 11 after the second dose, amounting to 28 percent and 12 percent respectively.

Among those who got the Moderna vaccine, there were no myocarditis deaths within 28 days of vaccination.

The study concluded that, in general, the risk of myocarditis from SARS-CoV2, the virus that causes COVID-19, was greater than the risk of myocarditis from the vaccines. But there was no control group of unvaccinated people, the study was limited to the 28 days following vaccination, and the conclusion didn’t hold for all ages or all the vaccines.

The study is a follow-up to a prior study in which the authors reported an association between the first and second doses of the vaccines and myocarditis.

Neither the CDC nor the Food and Drug Administration has ever acknowledged that any American has died from myocarditis caused by one of the COVID-19 vaccines.

The most recent version of the CDC advisory on adverse events after COVID-19 vaccination states that as of Aug. 31, there were 1,022 “preliminary reports” of myocarditis and pericarditis for people younger than 18 in the Vaccine Adverse Event Reporting System (VAERS) and that 672 of them had been verified and met the CDC’s working definition of myocarditis or pericarditis.

But there’s no mention of death as a possible outcome.

“Most patients with myocarditis or pericarditis after COVID-19 vaccination responded well to medicine and rest and felt better quickly,” the advisory reads.

A CDC morbidity and mortality report from February referenced one reported death from myocarditis but offered no confirmation.

“One death was reported; investigation is ongoing, and other contributory factors for myocarditis are being evaluated,” the report reads.

A CDC advisory on the adverse effects of COVID-19 vaccines linked to a Jan. 25 study in the Journal of the American Medical Association (JAMA), which found that the risk of myocarditis increased after both the Pfizer-BioNTech and Moderna vaccines and was highest after the second dose in adolescents and young men.

The JAMA study alluded to deaths without confirming any, saying that among people younger than 30, there were “no confirmed cases of myocarditis in those who died after mRNA-based COVID-19 vaccination without another identifiable cause” and that two other deaths “with potential myocarditis” are under investigation.