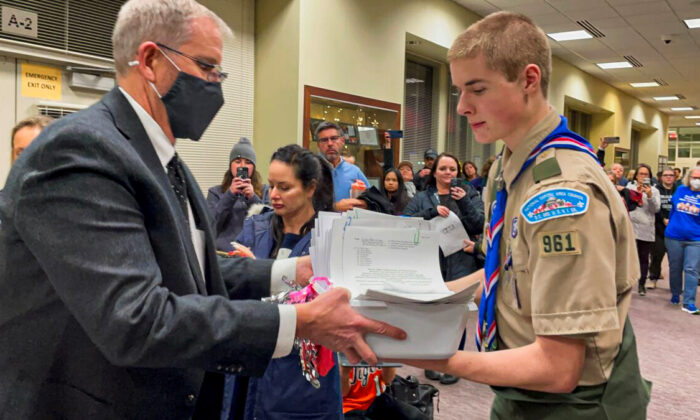 LOUDOUN COUNTY, Va.—Dozens of suspended students in Loudoun County attempted to serve the school board members a stack of notarized affidavits accusing the board of maladministration at a school board meeting on Feb. 8.

School board chair Jeff Morse asked the students to give the documents to the staff instead of receiving the affidavits. Superintendent Scott Zieger left the board room afterward and didn’t return until the superintendent’s report session after public comment.

The affidavits signed by Virginia citizens acting “sui juris”—“in their own rights”—by the U.S. Constitution ask the board to stop all critical race theory (CRT) related programs, to end “unconstitutional COVID-19 mandates,” and to provide full disclosure of sexual abuses in the school system.

CRT is a quasi-Marxist analytical framework that views America as systemically racist. LCPS has repeatedly said that CRT isn’t taught in its classrooms and that it presents a standard curriculum designated by the Virginia Department of Education. However, parents say that CRT ideas are embedded in the school policies, teachers’ training, and social emotional learning programs.

Rene Camp, one of the organizers of the effort, told The Epoch Times that the school board has ignored parents’ demands so far. Therefore, this new action aims at forcing a response.

The board will either respond with backup documents or ignore them, equivalent to admitting wrongdoing accused in the affidavits, according to Camp. Each participant signed nine copies of the paper, one copy for superintendent Scott Ziegler and eight copies for all school board members except for John Beatty, the only school board member who voted against keeping the mask mandate before Gov. Glenn Youngkin’s mask-optional executive order took effect on Jan. 24.

Megan Rafalski, leader of the education task force on behalf of various grassroots parent organizations in Loudoun County, told The Epoch Times that they planned for 20 parents joining the effort, but the final count reached 65.

When students handed the papers over to Lewis, Rafalski told him that the parents paid nearly $1,000 for the 585 copies of affidavits.

On Sunday, when parents gathered to prepare the affidavits, the mood was determined yet heavyhearted. On the previous Friday, the Arlington Circuit Court ruled a temporary injunction for the seven school boards to keep their mask mandate until a final ruling. Loudoun is not among the seven school boards that sued Gov. Youngkin over his mask-optional executive order signed on Jan. 15.

A lot has happened between then and now. On Monday, the Supreme Court of Virginia dismissed a lawsuit by Chesapeake parents who asked the court to halt Youngkin’s mask-optional executive order and restore the mask mandate in their school district. Then on Tuesday, the Democrat-controlled state Senate passed a bill to end mask mandates in Virginia public schools. The bill is expected to pass the Republican-majority state House and soon arrive at Youngkin’s desk.

Muriel Groce, who has two girls currently suspended from Blue Ridge Middle School, arrived early at what would be her first-ever school board meeting. “This is a primary example of how keeping the faith for the long battle just to be victorious and don’t give up hope,” Muriel told The Epoch Times about her feelings after learning of the passing of the state Senate bill.

“I couldn’t be happier about the news about the bill passing in the Senate. And I hope everything will follow through just in line. And we’re just so excited,” she added. “We’ve just had a rough, rough go of it, my kids especially. They have been suspended. Emotionally, the toll is very great.”

Muriel’s 11-year-old daughter Madeline told The Epoch Times, “I just want to go back [to school] without a mask.”