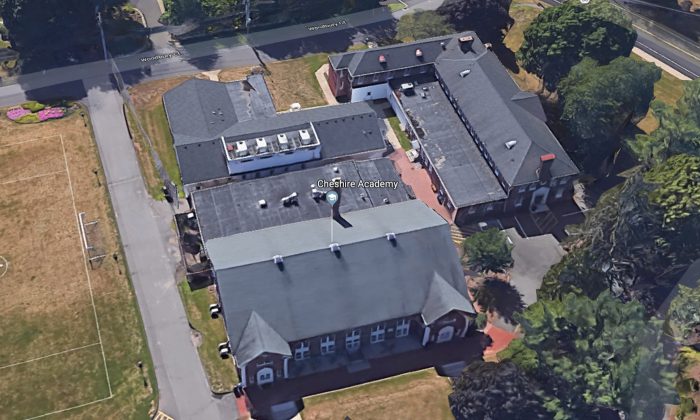 The Cheshire Academy in Connecticut. (Screenshot via Google Maps)
US News

A college preparatory school student was expelled because of his “politically incorrect views,” the student’s family claimed in a civil complaint filed in Connecticut Superior Court on April 15.

Michael Mancini—who was a sophomore at Cheshire Academy—was “scrutinized and tormented” for his politically incorrect views on subjects, despite the school staff and the Academy promising a fair and open-minded environment, his parents Theodore and Sonia Mancini, said in a court document (pdf) obtained by Connecticut Law Tribune.

Michael was recruited to attend and play football at the academy in July 2018.

The Mancini family alleges in the complaint that the Cheshire Academy suspended Michael for five days and will not renew its contract with them “because of Michael’s politically incorrect views.”

Michael was then expelled from the school after his father launched a website detailing the issue with the private school, the New York Post reported.

A West Hartford couple is suing Cheshire Academy, alleging the prep school expelled their son because he expressed conservative views, according to legal papers

Several incidents led to Michael’s suspension, the family stated in the civil complaint.

In one event, there was a discussion on William Shakespeare’s Twelfth Night—in which the character Viola cross-dresses as a male—in his English class. Michael disagreed with some classmates who claimed Shakespeare was portraying transgender individuals in a positive light, saying that during the time the book was written (1601-1602) society would never partake in that activity.

He was then verbally attacked by two of his classmates and asked by the teacher to explain himself afterward.

“Two girls who sit in front of my son proceeded to yell in his face and verbally attacking him for his opinion, screaming at him so loudly that he was unable to hear the teacher 10 feet away,” his parents said.

In another incident, the students formed into a circle and introduced themselves during a “Critical Conversation” workshop. They were asked to say their names, where they are from, grade, something obvious, and something not obvious about themselves.

“Something obvious about me is that I am black,” Michael joked while other students burst into laughter.

However, his teacher told him he couldn’t say that and reported him for harassment.

Cheshire Academy, which founded in 1794, is the state’s oldest boarding school.

They state on their official website that the mission of the school is to “challenges its students to maximize their potential by developing the confidence, character, and critical thinking skills that enable them to thrive as global citizens.”

The Mancini family is seeking an injunction to have Michael reinstated at the school as well as unspecified monetary damages, Sullivan told New Haven Register.

They also warn others who plan to attend the school.

“My advice to everyone thinking of attending this institution. Whether you are a rough and tumble football recruit or an academic who believes in diversity of thought and freedom of expression, PLEASE THINK LONG AND HARD ABOUT YOUR DECISION! If you do not buy in 100% into the whole identity politics, social justice movement then you will either have to keep your mouth shut, keeping your opinions to yourself, or risk being singled out, persecuted and kicked out for attempting to think freely!!!” they wrote on the website.

School officials told the Cheshire Academy community in a letter signed by school head Julie Anderson that a student had been expelled following “a fair process,” New Haven Register reported.

“This student was given a number of chances to adhere to our expectations and the rules and code of conduct of Cheshire Academy,” read the letter obtained by New Haven Register. “Contrary to what you may have read, our decision was not based on an opposition to political dialogue. We will take steps to defend the good name and reputation of CA, and will continue to work with legal counsel through this unfortunate episode.”

Our reporter has reached out Cheshire Academy for comments about the lawsuit but didn’t get a reply by the time of this publication.