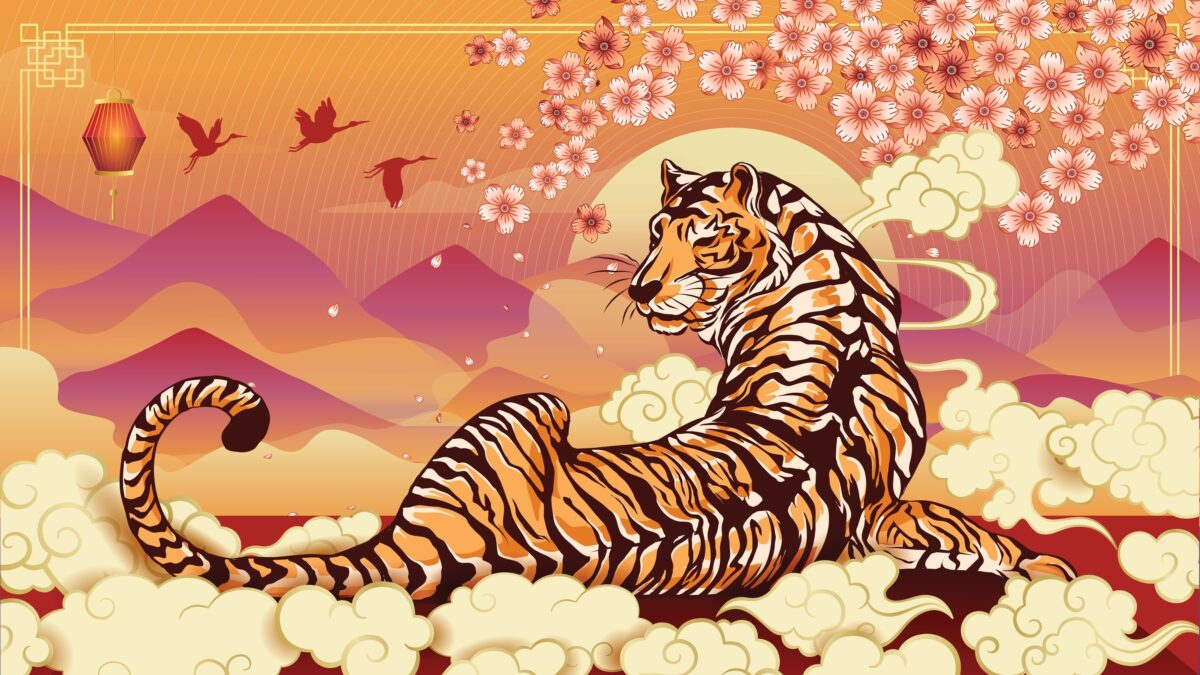 The tiger is a noble animal in the Chinese Zodiac. (i.Draw/Shutterstock)
Arts & Tradition

Strong and Courageous: Chinese New Year 2022: The Year of the Tiger

Chinese New Year 2022 falls on Tuesday, Feb. 1, on which day the Year of the Tiger starts. Tiger is the third of the 12 animals in the Chinese zodiac which includes the rat, ox, tiger, rabbit, dragon, snake, horse, goat, monkey, rooster, dog, and pig.

In China, tigers are a sign of strength and dignity. People born in the year of the tiger are usually brave, strong, sympathetic, and ambitious. They love challenges and have a keen sense of justice, although they may be aggressive, arrogant, and impetuous at times.

They are born with the charisma of leaders. As they are cheerful and straightforward, they can easily win the trust of others. They are also decisive and calm in times of trouble, so they are often the ones who decide things. With extraordinary energy and outstanding courage, Tiger people, naturally, tend to become the attention-getters and leading figures in a group.

Legend of the Tiger

Legend says the 12 zodiac signs did not include the tiger originally. Instead, the lion was part of the zodiac. The story goes back to ancient times. The lion had a bad reputation because it was very ferocious and notorious in the mountains. The Jade Emperor wanted to eliminate the lion from the list of the zodiac’s 12 animals. The celestial tiger, who loyally stood guard in front of the Heavenly Palace, became a suitable candidate because of its courage.

Before the tiger guarded the palace of the Jade Emperor, it was the king of the forest. No other animal was better than the tiger in catching, flapping, biting, rushing, and jumping.

Descending to earth, the tiger observed that the lion, the bear, and the horse were the strongest among the animals, so it challenged and defeated them one by one with its powerful skills. This frightened other animals who hid in the forest. The world became peaceful and human beings thanked the tiger for its efforts.

When the tiger returned to the Heavenly Palace, the Jade Emperor drew three horizontal lines on the tiger’s forehead for its three victories.

Later, a flood struck the earth, a disaster caused by the Turtle Monster from the East Sea. This sea creature did many dreadful things to humankind. The Jade Emperor commanded the tiger to go to the earth again to defeat the Turtle Monster. The tiger killed the sea monster and accomplished a great victory.

When it returned to the Heavenly Palace, the Jade Emperor honored it by drawing a vertical line within the three horizontal lines, which formed the character “王” (king) on its forehead. Since then, the tiger established itself as the king of all animals on earth. Since those legendary times, the tiger has undertaken the task to keep the peace on earth. With this, the Jade Emperor replaced the lion with the tiger on the Chinese zodiac.

The pattern on the tiger´s forehead is the Chinese character for “king:” 王 (pronounced “Wáng”) consisting of one vertical and three horizontal lines. The three horizontal lines represent heaven, earth, and people. In ancient times, the supreme rulers of the Xia, Shang and Zhou dynasties were addressed as kings (王.)

The Tiger in Traditional Chinese Culture

The tiger has a very special place in Chinese history. It symbolizes luck and has prompted a sense of both respect and admiration. Among the divine animals in Chinese mythology that people regard as protectors, such as the dragon (龍), phoenix (鳳凰), and the hooved chimerical qilin (麒麟), the tiger alone is physically seen in the human world.

A tiger designation often describes a person of great character. The Chinese call an able general a “tiger general,” a brave soldier a “tiger warrior,” and an energetic young person “little tiger.”

Some Chinese phrases today idealize the tiger, such as “Crouching Tiger Hidden Dragon” (藏龍臥虎 Cáng Lóng Wò Hǔ). This idiom (also the title of a popular movie) refers to someone’s hidden talents or talented people whose gifts are not yet recognized. They can, for various reasons, live unnoticed in society until their time has come to step forward.

Another phrase is “It’s like a tiger has wings” (如虎添翼, Rú Hǔ Tiān Yì). The idiom means a powerful being has help to become even stronger.

“Full of life and energy” (生龍活虎 Shēng Lóng Huó Hǔ) describes someone or something full of life, just like a lively dragon and a vigorous tiger.

“A ferocious tiger out of the mountain” (猛虎出山Měng Hǔ Chū Shān) describes someone who acts bravely and swiftly.

“Draw a tiger like a cat” (照猫画虎Zhào Māo Huà Hǔ) means copying or imitating. It is used when people just learn something superficially, but do not master or understand a task at all.

“In like a tiger, out like a mouse” (虎頭鼠尾Hǔ Tóu Shǔ Wěi) refers to doing things with great momentum at the beginning but getting little done in the end. “In like a lion, out like a lamb” is a similar English idiom.

“In like a tiger, out like a mouse” (虎頭鼠尾Hǔ Tóu Shǔ Wěi) refers to doing things with great momentum at the beginning but getting little done in the end. “In like a lion, out like a lamb” is a similar English idiom.

Celebrities Born in the Year of the Tiger

Some famous people were born in the Year of the Tiger: Ludwig Van Beethoven, (1770-1827), the great German composer; William Wordsworth (1770-1850), one of the most influential of England’s Romantic poets; Sun Yat-sen (1866-1925), the first president of the Republic of China and regarded as the father of the nation of Taiwan.

Greetings for the Year of the Tiger

The beginning of the Chinese New Year is an opportunity to let go of all grudges and send out greetings with good wishes and blessings. During the Covid-19 pandemic, warm wishes for good health can be more appreciated. Here are some of the most popular New Year’s greetings for the Year of the Tiger: