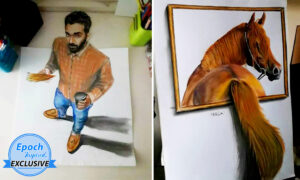 Photo of a brocken spectre taken by a passenger in a Boeing 747 airplane. A brocken spectre is a phenomenon by which the observer’s shadow is surrounded by rainbow fringes. (M. Royon)

Lead image of asperatus clouds over New Zealand by Witta Priester. To see more of her work, visit her Flickr page.