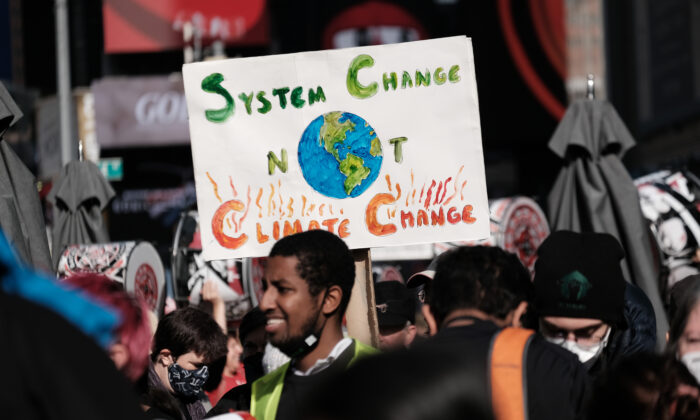 If COVID-19 has taught us anything, it’s that the technocratic class has little compunction about restricting freedom. Moreover, once they grab power, they are very reluctant to give it back.

But our would-be overlords have one big problem. The pandemic that they argued justified restrictions on individual liberty will eventually ebb. So, the search has been on for the next great excuse to limit liberty.

It’s increasingly clear that the “climate crisis” will fill that role. The beauty part—from the points of view of these want-to-be potentates—is that global warming is an evergreen, by which I mean, the purported emergency won’t fade any time soon, no matter what policies are enacted. If the power granted to public health authorities during COVID is also ceded to climate change warriors, it would become an authoritarianism without a foreseeable end.

An explicit argument toward pursuing that objective was just published in the American Political Science Review, one of the world’s most elite and influential professional journals. The author of “Political Legitimacy, Authoritarianism, and Climate Change” sniffs that liberty will have to be curtailed because we have refused to do what the experts told us!

“Democratic publics have, on multiple occasions, defeated (via referendum or protest) even modest carbon taxes,” the article grouses. Moreover, “Free speech rights in many countries have made regulating harmful climate denial and disinformation campaigns virtually impossible.”

Not only that, but “the primacy of individual autonomy has at times rendered even minor interventions (e.g., around light bulbs, fuel efficiency standards, or diets) extremely contentious, and more ambitious policies (like population control), unthinkable.” How hard it is to be an autocrat!

Needless to say, the author claims that “unfolding climate catastrophes” have created such an acute state of peril that—unless we voluntarily do what the climate autocrats tell us—world leaders will have no choice but to wield the dictator’s stick. The author helpfully provides specific examples of the despotic policies authoritarian climate governance could impose:

And if the people don’t want these policies?

“If such restrictions are necessary for preserving FL, then they may be justifiably imposed, even if doing so cuts against the wishes of democratic publics or violates individual or group-based rights … until the (credible threat of) emergency has passed.”

Some readers may be thinking: “So, one egghead writing in a high brow journal has delusions of grandeur. It will never happen.”

Don’t be so sure. The fact that such shocking advocacy was published in one of the world’s most important political science publications—and passed peer review!—means that the ideas expressed therein are deemed legitimate and respectable among political scientists and the ruling elite.

Moreover, this article is hardly a one-off. Such argumentation is becoming a pattern among international intellectuals and globalist leaders. For example, the secretary-general of the United Nations, António Guterres, argued in an official U.N. report that the world should adopt—and the U.N. administer—global speech codes to “better regulate, and manage our digital commons as a global public good.”

Dr. Anthony Fauci has argued that the U.N. should “rebuild the infrastructure of human existence.” Prominent medical journals have called for declaring climate change a public health emergency so that COVID-type restrictions can be imposed.

An advocacy column in the prestigious science journal Nature even proposed imposing “personal carbon allowances” that would ration emissions as the private purchase of gasoline was restricted during World War II—a policy that would be enforced through intrusive high-tech techniques of the kind currently imposed by the Chinese Communist Party’s odious social credit system.

We don’t hear too much about this bubbling cauldron of despotism in the mainstream media. Part of the reason, I think, is that many of these articles are written by academics and policy apparatchiks that most people have never heard of, in the dry prose of academic discourse that lulls readers to sleep.

Plus, media-dominant left-wing journalists’ may be sympathetic to the cause believing that climate activists are on the right side of history and the world is imperiled by “climate deniers.”

And we can never forget the selective outrage practiced so promiscuously by the mainstream press. I mean, imagine if someone in the Donald Trump orbit—say, Don Jr. or Steve Bannon—advocated revoking democratically enacted laws by fiat to serve a higher purpose. The screaming in the press would never stop.

But when the head of the U.N., Fauci, and influential academics—people who have far more power than either Junior or Bannon—propose worse anti-liberty prescriptions in the world’s most prestigious journals, all we hear is the sound of silence.

Attention must be paid. The scholarship of these articles is not funded, nor is it published, merely as a novel means of debating about so many angels and pins. They have a deeply practical purpose: to influence the thinking of the politically powerful and move these ideas from proposed, into enacted, public policy.

We can’t let such undemocratic advocacy lurk in the shadows. Personal liberty is too important to be left to the “experts.” The best way to prevent “climate authoritarian governance” is to expose advocates’ repressive ideas to the heat of public scorn.

And here’s the good news. There remains one huge obstacle standing between our still mostly free society and the oppressive world our would-be technocratic rulers want to impose.

Us. The more we know, the less likely they will succeed in their machinations.