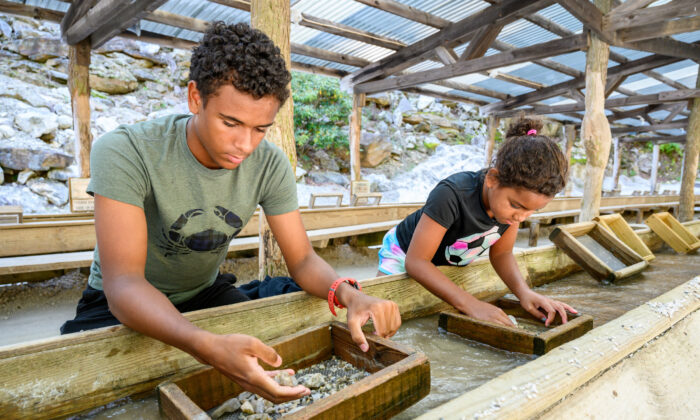 Vacationing in Arkansas, Nancy Meyers and Kathy Smith stop at a museum to admire a 5-foot-tall quartz crystal called “the Holy Grail.” Bill and Betty Price and their two young daughters sift through a pile of dirt in western Maine looking for gemstones. During a visit to Kentucky to celebrate his wife Evelyn’s 40th birthday, Tom McAllister buys her jewelry fashioned from locally gathered pearls.

Several states throughout the country have deposits of minerals, rock, and stone that are mined and often made available for people to find, keep or buy. Some designate an official state gemstone or other material, hoping to promote interest in their natural resources, history, and tourism.

Gemstones especially serve as magnets for visitors interested in purchasing something of value to wear and display when they return home. Other minerals and substances also have their fans. An internet search can provide information about official state gemstones and other natural treasures around the country. Some locations might be close to where you live.

Arkansas goes all out with an official state mineral (quartz), gem (diamond), and rock (bauxite). In the 16th century, a Spanish explorer reported observing Native Americans chipping tools from quartz. Later, the fame of the area’s quartz crystals was spread by health-seekers “taking the waters” at Hot Springs.

Pieces produced by Avant Mining are displayed at a number of museums, and visitors may dig for treasures at several commercial operations. Paying customers also can hunt for specimens at mines, and both public and private lands are open to “rockhounds”—amateurs who search for rocks, gemstones, and minerals as a hobby.

The dirt that the Price family was searching through in Maine, called tailings, was excavated from a tourmaline mine. Tourmaline has been found at more than 60 locations in the state and is a feature of the Maine Mineral and Gem Museum in Bethel.

Lesser known is that “thar’s gold in them thar hills” of Maine. One place where would-be prospectors can pan for that precious substance is Coos Canyon, a deep gorge in western Maine. Gold was discovered in the state in the mid-1800s, but most get-rich-quick dreamers soon headed for more productive destinations.

Coos Canyon is among places where panners can try their skill—and luck—and equipment and instructions are available. Those who think tourmaline is terrific may sift through tailings at Dig Maine Gems in West Paris or take field trips to nearby mines.

People who live in Camden, Tennessee, and near Kentucky Lake as well as those who visit those states have opportunities to learn about their official gems. Freshwater pearls are formed when a grain of sand or other small irritant enters the shell of a mollusk, which secretes a substance that coats the invader. The layers of the material that build up produce what we call pearls.

While natural pearls were plucked from mussels in local streams from the 1880s to 1914, the damming of rivers and increased water toxicity brought an end to that heyday. Today, visitors can admire and perhaps find the pearls at the Gemstone Freshwater Pearl farm overlooking Kentucky Lake. At the Tennessee River Freshwater Pearl Museum, they can also watch a diver emerge from the water with his catch.

Even though the smoky quartz is its gemstone, New Hampshire is known as the Granite State. Granite, which was formed when lava cooled and solidified, comprises much of the underlying bedrock. People who travel to New Hampshire to buy a granite countertop at discount often are surprised and pleased to learn that it’s also turned into items ranging from fence posts to fire pits and buildings to bridges. Granite outcroppings are visible in fields and along some roads. but that which is intended for commercial use is cut from underground deposits.

Turquoise, which has captivated people’s imaginations for millennia, is the official gemstone of Arizona. Bracelets made of the blue-green stone were found on the mummified arm of an Egyptian queen who lived around 5500 B.C., and it long has been featured in Native American jewelry. Mines in Arizona are best known for producing blue turquoise and for yielding green and blue-green specimens.

Even more costly substances also attract visitors and buyers to some states. Not surprisingly, given their history, gold is the official mineral of both Alaska and California, as well as North Carolina. Emeralds, rubies, and sapphires also have been unearthed in North Carolina. People can look for gemstones in about a dozen locations throughout the state and keep anything they find.

There also are surprises among the honors bestowed by states on materials that lie beneath their ground. Petrified wood is the designated gemstone of Washington and is the rock/stone of Mississippi.

Trees that grew in what now is Washington state millions of years ago when the area was swampy died, fell, and became waterlogged. They were fossilized and took on a variety of colors. The best places to view those preserved specimens are the Ginkgo Petrified Forest State Park and Yakima Canyon.

The Mississippi Petrified Forest near Flora has been declared a National Natural Landmark. A museum displays examples of petrified wood found in every state and other countries.