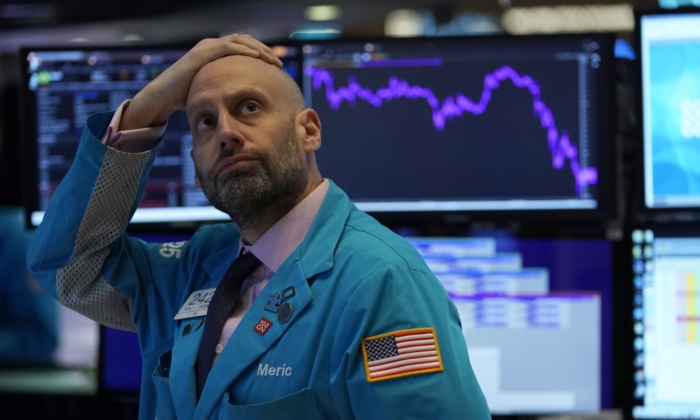 Meric Greenbaum looks up at the board before the opening bell right before trading halted on the New York Stock Exchange in New York on March 9, 2020. (Timothy Clary/AFP via Getty Images)
US News

Stocks plummeted on March 9 on Wall Street as fears of the coronavirus and a steep decline in oil prices shook trader confidence in the market and triggered the first automatic trading halt in more than 20 years.

The collapse of the alliance between Russia and the Saudi-led Organization of the Petroleum Exporting Countries (OPEC) coincided with Italy enforcing a lockdown of 16 million people in the heart of the country’s manufacturing and financial industries. The disruptive measure, the first of its kind outside of China, will weigh on the European economy.

European markets entered a bear market, closing the day with their heaviest losses since the darkest days of the 2008 meltdown. Italy’s index plunged 11.2 percent. Britain, France, and Germany were down between 7.3 percent and 8.4 percent.

U.S. stocks neared the 20-percent drop mark of a bear market, while the so-called “fear gauge” spiked to a level unseen since the 2008 financial crisis.

Yields on U.S. Treasury bonds plunged to record lows as investors sank money into seemingly safer places, even as the return on their investment approached zero.

On Wall Street, a 7 percent tumble in the S&P 500 just minutes after the market opened triggered an automatic 15-minute halt on trading at the New York Stock Exchange. The index ended the day down 7.6 percent.

“We knew it was going to be a hot day,” said John Spensieri, head of U.S. equity trading at Stifel. He said that the mood was “organized chaos” in the morning but that the trading halt achieved what it was supposed to by stopping the slide.

Each of the three major indexes dropped more than 7 percent, with the Dow Industrials shedding more than 2,000 points.

The Wall Street “fear gauge,” or the VIX volatility index, which is a measure of implied market swings, shot up to nearly 55 on March 9, a level not seen since the 2008 financial crisis. A reading above 31 is considered in highly volatile territory, with extreme levels of investor fear and uncertainty.

The move has been widely reported as an overt bid to wrest market share away from Moscow after talks between Russia and OPEC failed to agree on production cuts amid a coronavirus-driven collapse in oil demand.

The losses in the energy sector were particularly bad. With benchmark U.S. crude dropping to under $34 a barrel, Marathon Oil Corp., Apache Corp., and Diamondback Energy Inc. each sank more than 40 percent.

The lower level of activity will remain “until we see clear signs of commodity price recovery,” said Diamondback Chief Executive Travis Stice. “We will maintain positive cash flow and protect our balance sheet and dividend.”

The coronavirus has infected tens of thousands of people and killed thousands worldwide. The exact numbers are hard to estimate because the Chinese communist regime can’t be trusted for statistics of the disease’s spread in China, where COVID-19 originated.

Around the world, the coronavirus has led to factory shutdowns, travel bans, closings of schools and stores, and cancellations of conventions and other gatherings.

Fast-growing clusters of coronavirus have turned up in South Korea, Iran, and Italy, and fears are mounting in the United States, where a giant cruise ship idling off the California coast with at least 21 infected people aboard was scheduled to dock in Oakland on March 9 so that the thousands on the vessel could be whisked to U.S. military bases or their home countries for a 14-day quarantine.

Including the drop on March 9, the S&P 500 has now lost 18 percent since setting a record last month. If it hits a 20 percent drop, it would mean the end of what’s become the longest-running bull market for U.S. stocks in history, an 11-year run. March 9 marked the 11th anniversary of the market hitting bottom after the 2008 financial crisis.

Traders are increasingly betting that the Federal Reserve will cut interest rates back to zero to do what it can to help the virus-weakened economy, perhaps as soon as next week.

But doubts are rising about how effective lower rates can be this time. They can encourage people and companies to borrow, but they can’t restart factories, restaurants or theme parks shut down because people are quarantined.