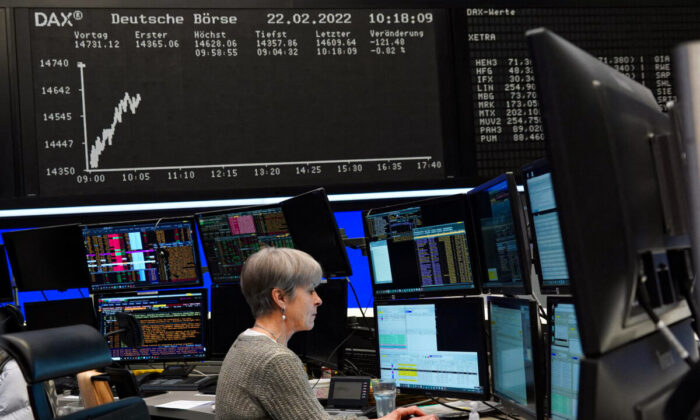 A trader works at the Frankfurt stock exchange in Frankfurt, Germany, on Feb. 22, 2022. (Timm Reichert/Reuters)
Stocks

LONDON—Oil prices broke above $100 a barrel for the first time since 2014, stock markets slumped and the rouble hit a record low on Thursday after Russian President Vladimir Putin launched an invasion of Ukraine.

Putin said he had authorized what he called a special military operation and the Ukraine government accused Moscow of launching a full-scale invasion.

The United States and its allies will impose “severe sanctions” on Russia after the attacks, President Joe Biden said. Europe’s leaders said they would freeze assets and shut Russian banks out of its financial markets.

The rouble weakened nearly 7 percent to an unprecedented 86.98 per dollar and there were 10 percent plus falls on the Moscow stock exchange when it opened after an initial suspension. The Russian central bank then ordered a ban on short selling and over-the-counter markets until further notice.

The equities rout had started with a 2.6 percent dive for pan-Asian indexes. Europe’s STOXX 600 index then fell 2.75 percent—hitting its lowest since May 2021 and 10 percent below a January record high.

The German DAX fell 3.7 percent, bearing the brunt of the sell-off due to heavy reliance on Russian energy supplies and the amounts its companies sell to Russia. The surge in oil prices helped limit losses on the UK’s commodity-heavy FTSE 100, although it still slumped 2.3 percent, and futures markets pointed to similar falls for Wall Street later.

S&P 500 e-minis were down 2 percent and Nasdaq futures were 2.8 percent lower, which if it materialises, would confirm the tech-focused index it is in a so-called ‘bear’ market.

“In the past when you have had geopolitical flareups you tend to have a very volatile periods on markets then normalisation, but it’s difficult to assess when we will get that,” said LGIM portfolio manager Justin Onuekwusi.

The dollar index was up 0.5 percent, in the currency markets. Assets have seen a sharp increase in volatility over the deepening crisis, with the Cboe Volatility Index, known as Wall Street’s fear gauge, up more than 55 percent over the past nine days.

Brent crude futures, jumped more than 3.5 percent to shoot past $100 a barrel for the first time since September 2014.

West Texas Intermediate leapt 4.6 percent to $96.22 per barrel, its highest since August 2014, while gold jumped more than 1.7 percent to hit its highest level since early January 2021.

That dive for safety also saw yields on Germany’s AAA-rated government bonds drop eight basis points to 1.139 percent, the lowest in three weeks. The benchmark U.S. 10-year yield was down sharply too, going as low as 1.86 percent from its U.S. close of 1.977 percent before edging back up to 1.90 percent.

Investors have also been grappling with the prospect of imminent policy tightening by the U.S. Federal Reserve aimed at combating surging inflation. The question now is whether the conflict will give central bankers a reason to delay those moves or whether the further rise in energy prices could spur them on.

While expectations of an aggressive 50-basis-point hike at the Fed’s March meeting have eased, Fed funds futures continue to point to at least six rate hikes this year.

“Markets are now more adequately pricing in the risk of something horrific happening. That combined with the uncertainty is a horrible environment to be in. No one wants risk exposure when that’s floating around,” said Rob Carnell, head of Asia Pacific research at ING.