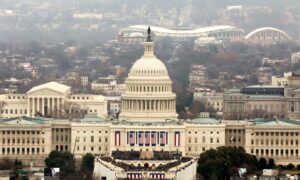 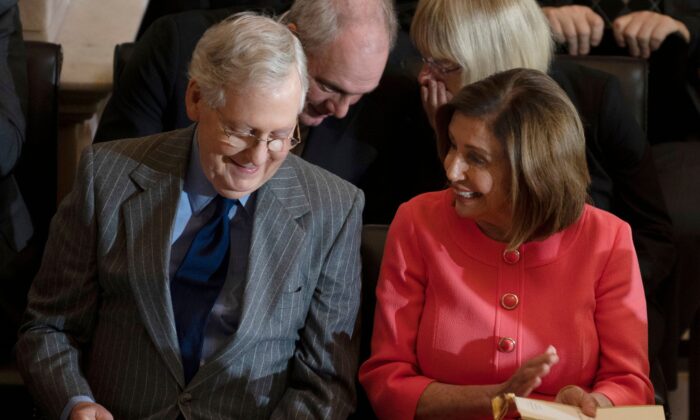 Once again, the mountain has labored mightily and brought forth a mouse.

Our dysfunctional Congress has just passed another “stimulus” bill designed to stimulate nothing but their own lust for power and determination to hang on to their seats at all costs—in this case, some $900 billion of our money, of which they have just doled out to the peons the grand sum of 600 simoleons to help ease the pain of the Dreaded Coronavirus and their devastation of our livelihoods.

Thanks to Mitch McConnell, who is 78, and Nancy Pelosi, who is 80. Fat-cat elderly millionaires both, these lifetime swamp creatures and selfless public servants have just pulled off an astounding feat of federal beneficence: sending pittances to many Americans to “ameliorate” the effects of the CCP virus panic that they themselves—and “servants” at every level of government—have caused.

Mr. and Mrs. America and all the ships at sea—you’ve just been hornswoggled. Again.

By now, the self-wrought economic destruction of the United States and other Western democracies has passed the point of transient disruption. As Ian Fleming, the creator of James Bond, noted in “Goldfinger,” one time is happenstance, the second time is coincidence, and the third time is enemy action. With a media campaign of fear that basically equates “cases” with certain death, we’re just about there.

How else to explain the timely and narratively convenient arrival of a “new strain” of the Chinese Communist Party’s weaponized bug in Boris Johnson’s utterly panicked Britain, which has shut travel to that miserable and benighted island. The “new” mutated strain—and all viruses mutate; just look at the seasonal flu—is said to more easily transmissible. Which doesn’t mean it is deadlier, but given the current hysteria, who’s going to notice.

And, just like that, the vaccine will no longer matter. Because they will never, ever, ever let us go.

Why not? For one thing, governments are too invested in the “new normal” to ever willingly go back to the old—the real—normal. The “new normal” is a place where human beings are taught to fear one another’s physical presence. Where they’re told to maintain anti-social distancing, as if even their parents and children were radioactive. Where they’re ordered to mask their visages, and thus, their emotions. Where they’re ordered to quarantine themselves on pain of arrest by a thuggish police force that for the most part can’t question authority and won’t use their powers of reason.

Where they’re expected to obey the increasingly deracinated orders of petty tyrants such as California’s pretty-boy governor, Gavin Newsom—thankfully now the subject of a recall petition. Or New York state’s goonish Andrew Cuomo, who just dealt the city’s restaurants a potential death blow by ordering (on what authority?) the closure of indoor dining.

And most of all, where they’re exposed on a daily and even hourly basis to the malignant, politicized coverage of the mainstream media, which has now fully aligned itself not only with the Democratic Party but with its most leftward elements. It openly advocates now against the freedom of speech, freedom of religion, and freedom of assembly clauses of the First Amendment and against other aspects of the Constitution, including the Electoral College and the U.S. Senate.

The chief offenders are The New York Times, which now injects anti-Trumpist, anti-rationalist, and anti-conservative editorializing into nearly every story, and The Washington Post, which fancies itself as a guardian of “democracy” but, in fact, supports the nullification of the Constitution and endorses the narrative of the New World Order—an ahistorical world without borders, a vengeful, ugly society based on retribution for selective past wrongs and an enthusiastic endorsement of a retrogression to a pre-Western culture of idealized utopianism that never existed, except in the fevered imagination of a guilt-tripped Hollywood.

They call it the “Great Reset,” an opportunistic power grab by the international oligarchy to finally destroy the nation-state in the name of global governance, whose motto, like the left’s, is “by any means necessary,” which very much includes both COVID-19 and “global warming” in their tactical philosophy. As Matthew 7:16 says: “By their fruits shall ye know them. Do men gather grapes of thorns, or figs of thistles?”

So it is with the thorn-and-thistle-strewn 5,593-page “stimulus” bill, which includes $10 million for “gender programs” in Pakistan and a whole section on “horseracing integrity and safety.” Their contempt for you is a bitter mockery of the Founders’ aspirations to republican democracy, pearls before swine except the “pearls” are faux and the swine are you. Trump should veto it immediately.

This is what comes of a country that purports to be “of laws, not men,” but is, in fact, a nation of lawyers, not men. Rather, America was first imagined and then created by European intellectuals, artists, statesmen—patriots with both taste and rifles. Men came first, then the laws that they made—not the other way around. That we are “a nation of laws, not men” is one of the stupidest clichés around, as is the idea that America is a “notional” country to which anyone can belong upon a pledge—however dishonestly made—to uphold the Constitution.

On the contrary, the United States was founded on the principles of the English and Scottish Enlightenment—settled not colonized (unlike the Spanish possessions in the New World)—with an eye to creating something never before seen in the history of the world: A self-governing land, ruled by neither by pompadoured potentates nor periwigged black robes but by the citizenry.

In other words, we aren’t subjects of a “notional” nation, but one with a direct, easily provable Anglo-European inheritance. A free country created by free men, who over the course of two and a half centuries have established laws to serve their vision of freedom and liberty, within the framework of a Constitution that was written by dead white male property owners who put their lives on the line for the good of all.

When those laws or the “interpretations” thereof constrain the freedom and liberty upon which the country was founded, they can and should be ignored and abolished.

What would the Founders have said to COVID? To panic? To fear? During a yellow fever pandemic, Americans moved our capital to the new shining city on a hill, Washington, from Philadelphia. During the darkest hours of the War of 1812, President James Madison and, later, his wife, Dolley, fled a burning White House, taking with her copies of Gilbert Stuart’s portrait of George Washington and the Declaration of Independence. Can we do any less?

Now, our elected representatives machinate against us. The Supreme Court, led by the moral and intellectual weakling John Roberts (a Bush appointee, of course), reject the plain language of the Constitution in order to preserve its “institutional legitimacy”—never mind the plain language of Article 3, which even a lawyer ought to be able to comprehend, but willfully won’t.

In short, they laugh in our faces and ask us to beg for more. And then they leave $600 on the dresser for us to shut up and go away. There’s a word for people who take that deal. Are you one of them?