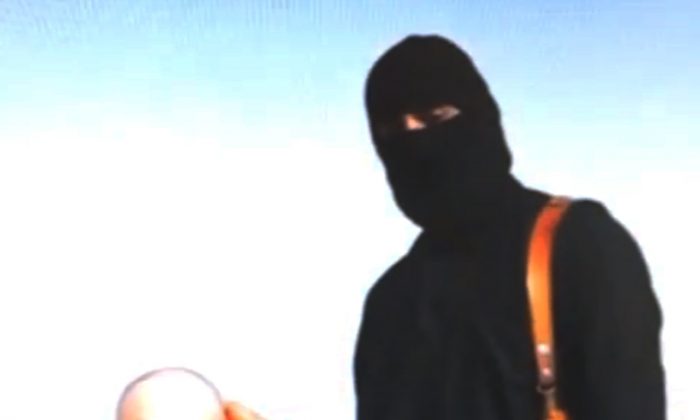 This still image from an undated video released by Islamic State militants on Tuesday, Aug. 19, 2014, purports to show journalist Steven Sotloff being held by the militant group. The Islamic State group has threatened to kill Sotloff if the United States doesn't stop its strikes against them in Iraq. Sotloff's mother, Shirley Sotloff, pleaded for his release Wednesday, Aug. 27, 2014, in a video message aimed directly at his captors that aired on the Al-Arabiya television network. (AP Photo)
US

Steven Sotloff, a journalist reportedly held by ISIS in Syria, was apparently beheaded in an video.

Members of ISIS, or the Islamic State, warned the US they would behead Sotloff after James Foley, another journalist, was killed a few weeks ago.

The fighter also reportedly said, “”I’m back, Obama, and I’m back because of your arrogant foreign policy towards the Islamic State.”

The White House issued a statement right after the incident, and it said that officials can’t verify the authenticity of the video footage. It, however, added that “thoughts and prayers are with Mr. Sotloff and Mr. Sotloff’s family.”

“It is something that will be analyzed very carefully by the U.S. government and our intelligence officials to determine its authenticity,” White House spokesman Josh Earnest told reporters in Washington, according to the New York Times.

The Associated Press and the AFP news agency reported that the SITE terrorism monitoring agency confirmed he was killed. Sotloff had previously worked for TIME magazine, Foreign Policy, and other publications.

He was last seen in Syria in August 2013. He appeared in a video that was released last month along with Foley’s killing.

The video and photos was distributed on Tuesday and was called, “A Second Message to America.” Sotloff is seen in a similar jumpsuit before he is beheaded by an Islamic State fighter, AP reported.

A few days ago, his mother begged ISIS to return her kidnapped son.

“I am sending this message to you, Abu Bakr al-Baghdadi al-Quraishi al-Hussaini, the caliph of the Islamic State. I am Shirley Sotloff. My son Steven is in your hands,” his mother, Shirley Sotloff, said, reported the Guardian. “You, the caliph, can grant amnesty. I ask you please to release my child. I ask you to use your authority to spare his life.”

“As a mother, I ask your justice to be merciful and not punish my son for matters he has no control over. I ask you to use your authority to spare his life and to follow the example set by the Prophet Muhammad, who protected People of the Book. I want what every mother wants, to live to see her children’s children, I plead with you to grant me this.”

The Washington Post posted the full transcript of the video:

Steven Sotloff: “I am Steven Joel Sotloff. I’m sure you know exactly who I am by now and why I am appearing before you. And now this time for my message:

Obama, your foreign policy of intervention in Iraq was supposed to be for the preservation of American lives and interests, so why is it that I am paying the price of your interference with my life. Am I not an American citizen? You’ve spent billions of U.S. tax payers dollars and we’ve lost thousands of our troops in our previous fighting against the Islamic State, so where is the people’s interest in reigniting this war?

From what little I know about foreign policy, I remember a time you could not win an election without promising to bring our troops back home from Iraq and Afghanistan and to close down Guantanamo. Here you are now, Obama, nearing the end of your term, and having achieving none of the above, and deceivingly marching us the American people in the blazing fire.”

ISIS fighter who does the killing: “I’m back, Obama, and I’m back because of your arrogant foreign policy towards the Islamic State, because of your insistence on continuing your bombings and [unclear] on Mosul Dam, despite our serious warnings. You, Obama, have but to gain from your actions but another American citizen. So just as your missiles continue to strike our people, our knife will continue to strike the necks of your people…”

In a new report, Amnesty International said militants abducted “hundreds, if not thousands” of women and girls of the Yazidi faith. The extremists also killed “hundreds” of Yazidi men and boys, Amnesty said. In at least one incident, the report said militants rounded up on trucks, took them to the edge of their village and shot them.

The 26-page report adds to a growing body of evidence outlining the scope and extent of the Islamic State group’s atrocities since it began its sweep from Syria across neighboring Iraq in June. The militants since have seized much of northern and western Iraq, and have stretched to the outskirts of the Iraqi capital, Baghdad.

On Monday, the United Nations’ top human rights body approved a request by Iraq to open an investigation into suspected crimes committed by the Islamic State group against civilians. Its aim would be to provide the Human Rights Council with evidence on atrocities committed in Iraq, which could be used as part of any international war crimes prosecution.

In its report, Amnesty detailed how the advance of Islamic State group fighters expelled an estimated 830,000 people — mostly Shiites and those belonging to tiny religious minorities that barely exist outside of Iraq. They include Aramaic-speaking Christians, Yazidis, a faith that traces to ancient Mesopotamia, the Shabak, an offshoot of Islam, and Mandeans, a gnostic faith.

Most fled as extremists neared their communities, fearing they’d be killed or forcibly converted to the group’s hard-line version of Islam.

Thousands of Christians now live in schools and churches in northern Iraq. Yazidis crowd into a displaced persons camp and half-finished buildings. Shiites have mostly drifted to southern Iraq.

The sudden displacement of the minority groups appears to be the final blow to the continuity of those tiny communities in Iraq. Their numbers had been shrinking since the U.S.-led invasion of Iraq in 2003, which triggered extremist violence against them.