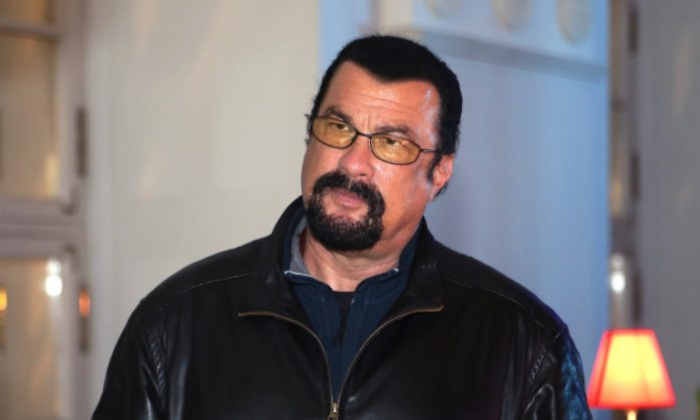 Action film star Steven Seagal denies accusations by actress and Bond girl Rachel Grant that he sexually assaulted her on a movie set in 2002.

Grant has also said Seagal tried to expose himself to her, an allegation the actor’s lawyers also deny, the BBC reported.

The complaint adds to the list of sexual misconduct allegations to have hit or resurfaced against Seagal in recent months, including from actresses Portia de Rossi, Jenny McCarthy and Eva LaRue.

“I want to share what happened to me, so people will hear it and others might come forward,” the BBC heard from Grant, who played the character Peaceful in the James Bond film Die Another Day. She says she was emboldened by women sharing their stories of sexual harassment as part of the #MeToo campaign.

The alleged assault took place in Sofia, Bulgaria, during the filming of Out For A Kill. The British actress, who was 26 at the time, was at a line reading in a hotel suite with the film’s director and Seagal, who would have been in his early 50s. At one point, the director left the room, according to Grant, and it was then that Seagal allegedly repeatedly asked the actress to take off her top.

Grant told BBC she refused each time. But when she stood up, Seagal forcibly pulled down her dress, exposing her breasts.

“I was forced to cover myself,” she told the BBC. “He pushed me on to the bed with force.”

Seagal then allegedly offered to expose himself, at which point Grant “burst into tears,” prompting the actor to stop and apologize. She said Seagal spoke of improving “on-screen chemistry” as a justification for his behavior.

Grant said she lost her part in the movie after the incident.

“What actress should be brought to someone’s bedroom on the first meeting and then be told to take their top off?” she said.

Seagal’s legal team provided a statement to the BBC on his behalf. “Our client denies having such contact with Ms Grant and further vehemently denies any alleged assault at all, in particular, the alleged assault occurring in Sofia, Bulgaria, in 2002.”

Other women accuse Seagal of sexual misconduct, including actress Portia de Rossi, who published a statement about an alleged incident during an audition.

My final audition for a Steven Segal movie took place in his office. He told me how important it was to have chemistry off-screen as he sat me down and unzipped his leather pants. I️ ran out and called my agent. Unfazed, she replied, “well, I didn’t know if he was your type.”

Former model and current neuroscientist Faviola Dadis accused Seagal in an Instagram post of groping her during an audition in 2002.

She said “In light of the allegations by #PortiadeRossi, I want to speak up about something I should have years ago. When I was around 20 I was auditioning for a movie with #StevenSeagal and was sexually assaulted by him.”

Dadis said she was led to a room guarded by security, with Seagal inside. At one point in the audition, he allegedly asked her to “act out a romantic scene.”

“I was hesitant and expressed this, then he started fondling my breasts and grabbing my crotch. I quickly yelled “This audition is over!”, and tried to run out of the room but was blocked by his security. I started making a noticeable amount of noise, and his security realized I would alert someone, and let me leave.”

Dadis said she didn’t speak out until now out of fear.

Seagal has not responded to the allegations.