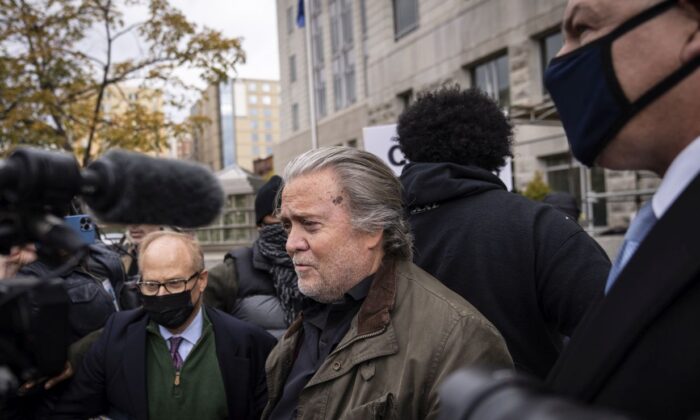 Ex-White House advisor Steve Bannon arrives to turn himself in at the FBI Washington Field Office on Nov. 15, 2021. Bannon was charged with two counts of contempt of Congress after refusing to comply with a subpoena from the House Select Committee investigating the Jan. 6, 2021, attack on the U.S. Capitol. (Drew Angerer/Getty Images)
Congress

Steve Bannon’s legal team has issued subpoenas to top Democrats and members of the controversial Jan. 6 House Committee in a development in Bannon’s ongoing contempt of Congress case.

In October 2021, the Democrat-led House voted to certify a contempt of Congress charge against Bannon, who had refused a subpoena from the Jan. 6 panel, asserting a right to executive privilege as a former White House staff member.

Despite legal questions over the validity of the panel’s subpoenas, the Department of Justice decided to pursue a criminal case against Bannon.

Now Bannon’s lawyers have issued 16 subpoenas to top members of the committee, as well as other Democrats.

House Speaker Nancy Pelosi (D-Calif.), who chose the panel’s members; Rep. Bennie Thompson (D-Miss.), the panel’s chairman; and the only two Republicans on the committee, Reps. Liz Cheney (R-Wyo.) and Adam Kinzinger (R-Ill.), were among those subpoenaed.

The subpoenas, which were obtained by The Epoch Times, demand that the panel members turn over documents touching on an array of issues relevant to the case against Bannon.

The circumstances surrounding the establishment of the Jan. 6 Committee, which was created in a mostly party-line vote, have been a rallying point for critics of the panel.

Despite a longstanding House tradition of allowing minority leaders to choose their party’s members on committees, Pelosi refused efforts by House Minority Leader McCarthy (R-Calif.) to name Rep. Jim Jordan (R-Ohio) ranking member of the committee. Instead, Pelosi appointed Kinzinger and Cheney to the commission in an unprecedented breach of House tradition. McCarthy withdrew his picks in protest.

The subpoenas also demand all documents “regarding President Donald J. Trump’s assertion of executive privilege in response to any request of the Select Committee.”

Since the establishment of the Jan. 6 panel, many former Trump officials have refused to testify or hand over documents, asserting a right to executive privilege.

Legal scholars are divided on the validity of these claims. However, some Republican critics of the committee have argued in the past that because the issue is so uncertain, federal courts should be consulted before moving ahead.

The subpoenas also request all documents “that reference making an example of Mr. Bannon, punishing him, hoping to influence or affect the conduct of other potential witnesses before the Select Committee, or words of similar meaning and effect.”

Many critics have accused the Jan. 6 panel of partisanship because the Democrat-dominated committee almost exclusively has targeted Republicans.

By the same token, another request in the subpoenas suggests that Bannon’s legal team suspects bias against Bannon by some members of the panel.

The documents were delivered to targeted panel members electronically “to avoid the spectacle of approaching individual Representatives and staff members to personally serve them,” David Schoen, an attorney for Bannon, wrote in a letter affixed to the subpoenas.

It isn’t clear whether the subpoenas have yet been accepted. A lawyer for the House didn’t respond to a request for comment.

Bannon was, for a long time, the only person to face criminal charges for refusing a Jan. 6 committee subpoena.

On June 3, former Trump adviser Peter Navarro—who also refused the subpoena on grounds of executive privilege—was indicted by a grand jury for contempt of Congress.

The commission hasn’t restricted itself to only former Trump officials, going so far as to target sitting members of Congress, such as Reps. Jim Jordan (R-Ohio), Scott Perry (R-Pa.), and even McCarthy.

McCarthy called the efforts to subpoena sitting members of Congress an “abuse of power,” and all three House Republicans refused to testify before the committee.

The panel also set its sights recently on Ginni Thomas, Supreme Court Justice Clarence Thomas’s wife, over claims that she texted Meadows during the Jan. 6, 2021, rally.

In view of the partisan nature of the summons and charges advanced by the committee, some Republicans, including Trump, have accused it of a “witch hunt” exclusively targeting Democrats’ Republican enemies.

Others, such as McCarthy, have been more ambiguous in their critiques of the committee. When the panel sent out its subpoena to Bannon, McCarthy argued that the ongoing legal disputes made the subpoena’s legitimacy unknown.

Following the committee’s recent decision to subpoena several prominent Republicans—marking the first time in U.S. history that sitting members of Congress have been subpoenaed by a congressional body—McCarthy further expanded on his argument that the subpoenas are potentially invalid.

“All valid and lawfully issued subpoenas must be respected and honored,” Elliot S. Berke, McCarthy’s attorney, wrote in a lengthy May 27 letter (pdf). “Unfortunately, the words and actions of the Select Committee and its members have made it clear that it is not exercising a valid or lawful use of Congress’ subpoena power.

“In fact, the Select Committee is not even operating in compliance with the rules its own members voted to put in place.”

Regarding that point, Berke cited Pelosi’s refusal to place minority-selected members on the commission.

Jordan, another Republican who received a subpoena from the commission, has also refused to comply with what he called a “political vendetta.”

If convicted of contempt of Congress, Bannon faces a minimum sentence of one month in jail to a maximum sentence of 12 months in jail, as well as a fine ranging from $100 to $100,000.