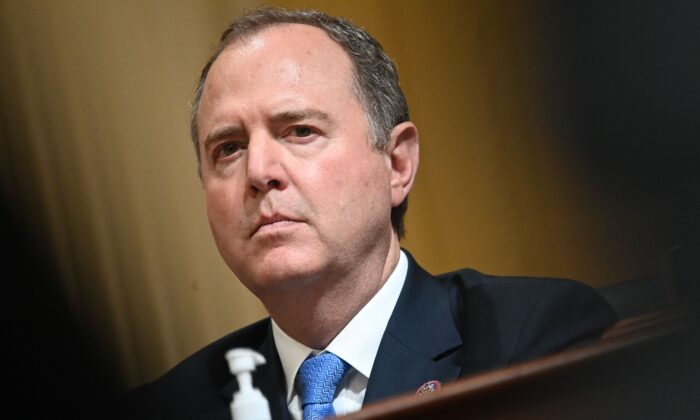 Rep. Adam Schiff (D-Calif.) looks on during a hearing of the U.S. House Select Committee on the Jan. 6 Capitol breach on Capitol Hill in Washington on June 16, 2022. (Mandel Ngan/AFP via Getty Images)
US News

Staffers for Rep. Adam Schiff (D-Calif.) and another member of Congress allowed producers with Stephen Colbert’s show into the U.S. Capitol before the producers were arrested, according to Rep. Rodney Davis (R-Ill.).

“It’s my understanding that these individuals were brought in by someone associated with Adam Schiff’s office,” Davis, the top Republican on the House Administration Committee, said on Fox News.

Seven people were arrested on June 16 around 8:30 p.m. at the Longworth House Office Building because they did not have an escort and did not have congressional identification, the U.S. Capitol Police (USCP) said.

Officers determined the individuals were part of a group that had been asked to leave earlier in the day and charged the people with unlawful entry.

The building and other House office buildings are linked to the Capitol by tunnels.

A CBS spokesperson confirmed that a Colbert production team were the ones arrested.

The team was recording interviews for a comedy segment on behalf of Colbert’s show on Wednesday and Thursday; the interviews “were authorized and pre-arranged through congressional aides of the members interviewed,” the spokesperson said.

“After leaving the members’ offices on their last interview of the day, the production team stayed to film stand-ups and other final comedy elements in the halls when they were detained by Capitol Police,” they added.

The USCP did not respond to a request for the identities of those arrested.

“That’s why we’ve got to get more information,” Davis said. “That’s why we need an investigation. We need to make sure that we understand who in their offices brought these individuals in?”

According to preliminary information the congressman has received, Schiff’s office initially let the team into the Capitol during the House of Representatives panel investigating the Jan. 6, 2021, Capitol breach. After the group was removed, a staffer with a different member’s office—reportedly Rep. Jake Auchincloss (D-Mass.)—enabled the group to enter the nearby building.

Spokespersons for Schiff and Auchincloss did not return queries.

The group was spotted banging on the doors of offices, including the office of House Minority Leader Kevin McCarthy (R-Calif.), according to Davis.

Davis contrasted the situation with that of one involving Rep. Barry Loudermilk (R-Ga.), who led a tour of the same building on Jan. 5, 2021.

Democrats have accused Loudermilk of leading a reconnaissance mission, which Loudermilk disputes. The USCP recently said the tour was not suspicious, and no one on the tour has been arrested.