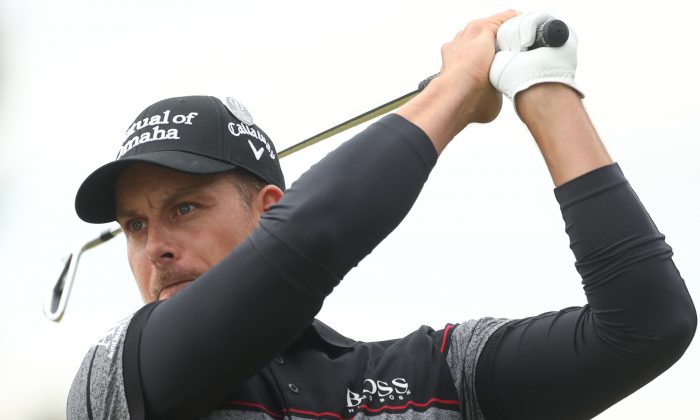 Henrik Stenson of Sweden plays his tee shit from the12th during the final round of the British Open Golf Championship at the Royal Troon Golf Club in Troon, Scotland, Sunday, July 17, 2016. (AP Photo/Peter Morrison)
Golf

TROON, Scotland—Henrik Stenson kept hitting the best shots of his life, one after another, because there was no other way to beat Phil Mickelson in a British Open duel that ranked among the best in golf.

All he wanted was the silver claret jug. Stenson wound up with so much more Sunday.

Stenson’s final stroke of this major masterpiece was a 20-foot birdie putt on the 18th hole at Royal Troon that tumbled into the cup on the last turn for an 8-under 63, matching Johnny Miller for the lowest closing round by a major champion.

It also gave him a 20-under 264, the lowest 72-hole score in major championship history.

Stenson won by three shots over Mickelson, who played bogey-free for a 65 and posted a score that would have won all but two Opens over more than a century on the links.

Just not this one.

It was reminiscent of the “Duel in the Sun” just down the Ayrshire coastline at Turnberry in 1977, when Tom Watson beat Jack Nicklaus by one shot after a weekend of punches and counterpunches.

Until that final birdie, Stenson and Mickelson were never separated by more than two shots over 40 consecutive holes. Stenson pulled ahead with an 18-foot birdie putt on the par-3 14th hole, and he seized control for the first time all day with a 50-foot putt across the 15th green.

Stenson started walking when the putt was halfway there, stopping to pump his fist, rare emotion for a 40-year-old Swede with ice blue eyes.

Mickelson narrowly missed an eagle putt on the 16th hole, and Stenson kept his two-shot lead with an up-and-down for birdie from deep rough.

J.B. Holmes finished third. He was 14 shots behind.

Mickelson Magic at The Open!