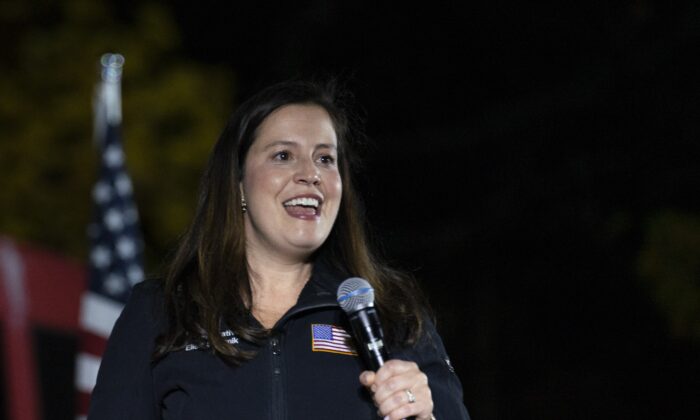 In a statement to The New York Times, Stefanik said she was “proud” to endorse Trump for president in 2024, adding that it is “time for Republicans to unite around the most popular Republican in America who has a proven track record of conservative governance.”

Trump has not yet announced that he plans to run for president in 2024, however, he hinted heavily at it on Nov. 3 when addressing supporters at a Sioux City, Iowa rally where he was campaigning for Iowa Gov. Kim Reynolds and Sen. Chuck Grassley (R-Iowa), amid the midterm elections.

After telling the crowd they should “get ready,” Trump added, “And now, in order to make our country successful, and safe, and glorious, I will very, very, very, probably do it again, OK?”

Trump’s appearance in Iowa came shortly after he said at a rally in Texas that he would “probably have to do it again” next year, referencing a 2024 White House run.

The former president is set to deliver a “special announcement” at his Mar-a-Lago home on Nov. 15 where he is widely expected to announce his run for the 2024 presidential election.

Stefanik is the third highest-ranking Republican, and her endorsement will no doubt be welcomed by Trump. The lawmaker elaborated on her previous statement regarding the former president in a statement to Breitbart News, where she explained that it is “very clear” that Trump is the leader of the Republican Party.

‘America Was Strong’ Under Trump

“What the media fails to report is that we just won the midterms and flipped the House,” Stefanik said. “I am proud to endorse Donald J. Trump for President in 2024. I fully support him running again. Under his presidency, America was strong at home and abroad, our economy was red hot, our border was secure, our neighborhoods were safe, our law enforcement was respected, and our enemies feared us.”

The lawmaker went on to take aim at President Joe Biden’s policies which have resulted in inflation soaring to 40-year-highs, an influx of illegal immigrants at the border, and a widespread crime crisis.

She added that Americans cannot afford another four years of such policies under the Biden administration.

“It is time for Republicans to unite around the most popular Republican in America, who has a proven track record of conservative governance. Poll after poll shows that President Trump would defeat any Republican challenger by massive margins, and would beat Joe Biden if the election were held today. President Trump has always put America First, and I look forward to supporting him so we can save America,” Stefanik said.

Respondents in that poll were asked, “If the 2024 Republican presidential primary were being held today, for whom would you vote?”

A separate Harvard CAPS-Harris survey published in October found Trump led Biden in a hypothetical 2024 matchup, with 45 percent of voters saying they would support the former president for a second term in 2024, compared to 43 percent who would support Biden.