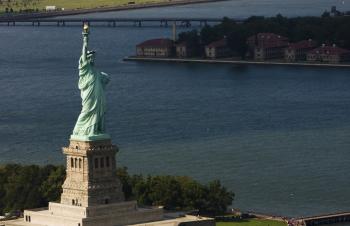 STATUE OF LIBERTY: A copper chunk designed to create the Statue of Liberty's nose in a 1980s restoration will be auctioned off in September. (The Epoch Times)
US

Statue of Liberty’s Nose Up for Auction

President Arlan Ettinger told The Associated Press that the 2-foot-long copper casting is one of the four castings that were made. Other than this one, one currently adorns the statue, one was destroyed, and another is in a private collection.

The piece consists of the tip and the area around the nostril.

Other than the copper chunk, the auction house will also include a motorcycle from President John F. Kennedy’s Dallas motorcade, James Dean’s sunglasses, the last home run ball from the original Yankee Stadium, and a photo negative of Marilyn Monroe in the Sept. 24 auction.