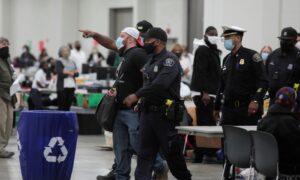 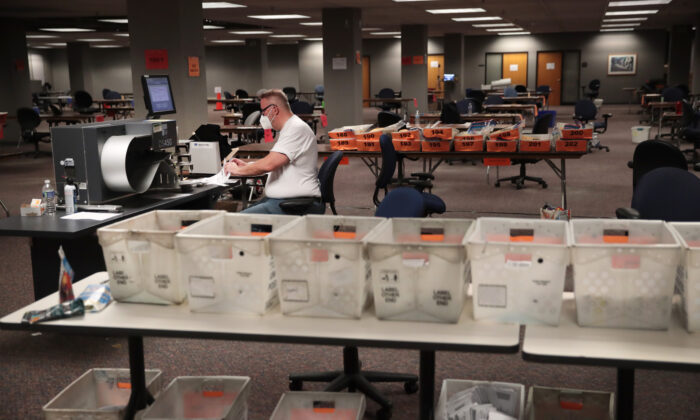 With the 2020 elections marred by legal challenges and fraud allegations, some have used statistical analysis to try to determine if foul play was involved. In several states, analyses of election data indeed show statistically odd phenomena in the tallies of votes for the Democratic candidate, former Vice President Joe Biden.

One of the most common arguments is that in some localities, vote counts for Biden violate Benford’s Law.

In simple terms, the law states that in many real-world data sets, such as demographic data, geographical data, or even sports statistics, the first digit of the numbers will more likely be 1 than 2, and 2 more likely than 3, etc. following logarithmic scale. If the first-digit distribution significantly diverges from this rule, it could be evidence of artificial manipulation of the data.

The law has been used to identify fraudulent financial records and other illegal activities. Walter Mebane, a political science professor at the University of Michigan, used the law to back ballot-stuffing allegations in the 2009 Iran election (pdf). Some researchers also used the law to check for irregularities in the 2016 election in Wisconsin (pdf).

While the results in Georgia and Florida generally adhered to Benford’s Law, there were significant deviations in votes for Biden in Wisconsin, Illinois, and Pennsylvania.

Mebane acknowledged some anomalies in the data, but cautioned against using the first digit analysis on election results.

“The first digit is largely determined by the number of voters in each precinct, as usually—and especially in small jurisdictions such as individual cities and counties—the share of the votes received by parties or candidates does not vary all that greatly across
precincts,” he said in a Nov. 9 paper (pdf).

Analyzing the Chicago results, he didn’t find any anomalies. “The first-digit distribution has nothing whatsoever to do with any kind of election fraud,” he said.

Using the Election Forensics Toolkit he co-authored in 2015, he went through the results in Milwaukee and Allegheny County without finding anything out of the ordinary.

He did find some anomalies in Fulton County, but called them “probably benign.”

One indicator for Democrat votes in the county “might be a concern,” he said, but added that the indicator “nearly” exceeded the expected value for Republican votes too.

He also used a variant of the Benford’s Law that applies to second digits.

In Milwaukee, the analysis showed an anomaly in the Trump votes, which was, however, “perfectly compatible with nonstrategic votes,” he said.

The Biden vote counts were also anomalous and in a way that “is harder to explain,” he said.

“But it matches results observed in some German elections … that are generally not considered to be problematic.”

One Twitter user went deeper on the Milwaukee analysis and found that in many city wards, votes counted after 3 a.m. on Nov. 4 went to Biden by a much larger margin than those counted before. Sometimes, the difference was as high as 40 percentage points.

Milwaukee’s county clerk didn’t immediately respond to a request by The Epoch Times for comment regarding the discrepancy. Wisconsin is headed for a recount, showing Biden slightly ahead.

The office of Pennsylvania Secretary of State didn’t immediately respond to questions about the anomalies. While Biden is ahead in the state, Trump has challenged the results in court.

The tally in Michigan, where Biden is ahead by a small margin, also seems to be statistically peculiar.

Around 5 a.m. on Nov. 4, data firm Decision Desk HQ updated the vote count for Michigan, adding 138,339 votes to Biden, but zero to Trump. The statistical impossibility of such a scenario prompted people to speculate that votes were illegally injected into the tally.

Within 40 minutes, Decision Desk HQ posted another update that subtracted 110,796 votes from Biden’s total and added 16,638 to Trump’s. It later said a “clerical error” in Shiawassee County caused the distribution of incorrect data and has since been fixed.

Then, at 6:18 a.m., the firm posted another update, which added 158,902 votes to the Biden tally and 29,295 votes to Trump’s. Those votes split roughly 85 percent for Biden—an exceptionally high ratio.

One explanation could be that those votes came from a deep-blue county and only included absentee ballots, which were expected to heavily favor Democrats.

However, even absentee ballots in Washtenaw County, which went for Biden by the largest margin, split in his favor by less than 82 percent. In addition, the candidate only picked up 125,927 absentee votes there, so many would have had to have come from another county less favorable to Biden.

A spokeswoman for the Michigan Secretary of State didn’t respond to questions about these votes.

Update: The article has been updated with information from a paper by Prof. Walter Mebane.