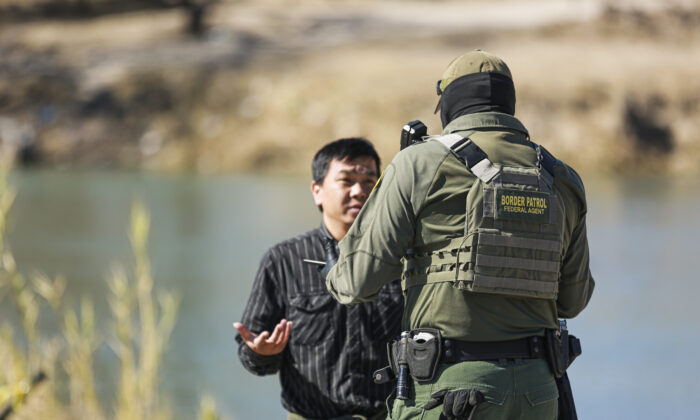 A lawsuit filed in federal court on April 4 is seeking to compel federal officials to keep a pandemic-era order in place to help manage the crisis at the U.S.–Mexico border.

If the Biden administration is allowed to rescind the Title 42 order next month, it will lead to a spike in illegal immigrants flooding across the border, according to the new suit.

“Defendants’ unlawful termination of the Title 42 policy will induce a significant increase of illegal immigration into the United States, with many migrants asserting non-meritorious asylum claims,” the attorneys general of Arizona, Louisiana, and Missouri, who brought the lawsuit, said in the filing.

They cited reports quoting Biden administration officials who project that up to 18,000 illegal aliens could be apprehended at the border every day if the order is lifted.

White House communications director Kate Bedingfield recently told reporters that the termination of the order would lead to “an influx of people to the border” and Customs and Border Protection Chief Chris Magnus said on April 4 that “we will likely face an increase in encounters above the current high levels.”

Under Title 42, border agents can quickly expel illegal aliens because they may have COVID-19, the disease caused by the CCP (Chinese Communist Party) virus.

The order was first imposed in March 2020 during the Trump administration and has remained in place since then, although after President Joe Biden took office, it was halted for illegal immigrant children who arrive without a responsible adult.

Nearly 90,000 immigrants were expelled from the country under the order in February alone.

The Centers for Disease Control and Prevention (CDC), which issued the order, announced on April 1 that it would end on May 23.

The decision was made because of “current public health conditions and an increased availability of tools to fight COVID-19 (such as highly effective vaccines and therapeutics),” according to the agency.

CDC Director Dr. Rochelle Walensky wrote in the termination decision that COVID-19 cases have “rapidly [decreased]” since the latest peak in January, along with hospitalizations and deaths linked to the disease.

In the federal complaint, the attorneys general claimed disparate treatment of the order and other pandemic-era policies, noting that masking requirements remain in place on federal modes of transportation and that the Biden administration hasn’t rescinded its COVID-19 vaccine mandates.

“This proves the hypocrisy of the White House. COVID is either over or it’s not,” Louisiana Attorney General Jeff Landry, one of the plaintiffs, told The Epoch Times. “All this is a great example of how the Democrats have continued to grant greater rights to those who want to break the law to get into this country than our own citizens here in America.”

The Republican officials also said the termination is arbitrary and capricious and thus in violation of federal law because the defendants didn’t give notice to the public and solicit comments, even though the government did when first imposing the order.

They’re asking the court to rule that the termination violates the Administrative Procedure Act and enjoin defendants from ending Title 42.

Most defendants didn’t respond to requests for comment. Customs and Border Protection declined to comment, with a spokesman saying the agency doesn’t comment on pending litigation.