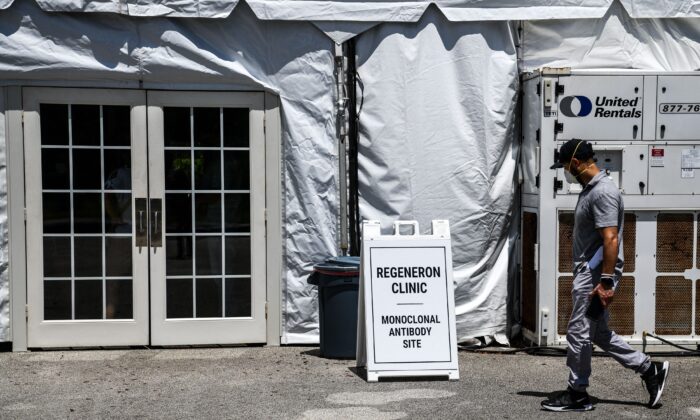 Some states are set to receive fewer doses of monoclonal antibody treatments after the Biden administration switched the distribution system this week.

Demand for monoclonal antibodies, used to treat non-hospitalized COVID-19 patients, has shot up in recent weeks, leading to what some officials have described as a shortage.

The Biden administration tipped off states in early September that it was limiting distribution of the treatment before abruptly switching on Sept. 13 from letting sites directly order the doses to putting the federal government in charge of allocation to states, which can then choose where to send them.

Some state officials say they weren’t notified of the change until late Sept. 13, and that pending orders with AmerisourceBergen, the primary distributor in the old model, were being closed out.

The Department of Health and Human Services (HHS) alerted Texas health officials “that the national supply has considerably decreased and states should expect lower amounts of therapeutics available for shipment in the coming weeks,” Douglas Loveday, press officer for the Texas Department of State Health Services, told The Epoch Times in an email.

“The amount available to distribute is expected to be disproportionately small compared to the amounts needed.”

Other states have also been told they won’t get as many doses as they were getting before. Among them are southern states grappling with the worst COVID-19 outbreaks in the nation.

Dr. Scott Harris, Alabama’s top medical officer, said HHS recently called to “let us know that Alabama and some other states are going to be on an allocation.”

“We don’t think providers are going to be able to order as much as they would like,” he said during a briefing late last week. Up until the change, “there was really sort of no limit to what could be ordered.”

HHS and the federal COVID-19 response team didn’t respond to requests for comment.

HHS said in an update on Sept. 13 that the higher number of COVID-19 cases in the United States in recent weeks has “caused a substantial surge in the utilization of monoclonal antibody (mAb) drugs,” especially in parts of the country with low vaccination rates.

Federal officials informed state health officials that there’s been a 20-fold increase in demand for monoclonal antibodies in just the past few weeks, James Blumenstock, chief of health security at the Association of State and Territorial Health Officials, told The Epoch Times.

“Clearly that’s outstripping the current supply even with the supply increase this month; that increase is not sufficient to meet the current demand,” he said.

The timeline for when supplies will increase enough to meet the jump in demand isn’t clear. The new process will help ensure consistent availability for the drugs in all parts of the nation, according to HHS, which is basing its weekly shipments on reports of new COVID-19 cases and hospitalizations and inventory data.

Monoclonal antibody treatments from two companies, Regeneron and Eli Lilly, are purchased by the federal government and distributed across the nation. Patients get them for free. The treatment received emergency use authorization from drug regulators earlier in the COVID-19 pandemic. Clinical trials show that they reduced hospitalization or death by as much as 70 percent.

It takes several weeks or months to produce a batch of Regeneron’s drug, REGEN-COV, a spokesman for the New York-based company told The Epoch Times in an email. Regeneron says demand has grown since earlier this year but that it’s ready to deliver new doses quickly because it “remained proactive” and has the drug in various stages of the manufacturing process.

An Eli Lilly spokesperson told The Epoch Times in an email that the Indiana-based company “continues to work with governments globally to help address the therapeutic needs of patients during the COVID-19 pandemic.”

Another monoclonal antibody treatment, from GlaxoSmithKline, isn’t being distributed through the federal government. A spokesperson for the company, which is headquartered in the United Kingdom, told The Epoch Times in an email that there are no supply or access issues for its medicine.

The United States has purchased or committed to purchasing nearly 3 million doses of REGEN-COV, including 1.4 million doses on Sept. 14. Most of the doses cost taxpayers $2,100 each, according to the Regeneron spokesman. Eli Lilly’s treatment requires two drugs, etesevimab and bamlanivimab. The company just reached an agreement to provide 388,000 additional doses of etesevimab to the U.S. government for nearly $1,000 each, building on earlier contracts to supply nearly 1 million vials of one drug or the other.

More than 2.1 million monoclonal antibody doses were shipped to more than 8,000 sites across the nation as of early September, John Redd, chief medical officer for HHS emergency preparedness and response office, told state officials in a recent call.

Redd said that HHS hadn’t returned to the allocation model that was used between November 2020 and February. A few days later, the model was switched.

Biden’s administration said last week in a fresh COVID-19 response plan that it would increase shipments of monoclonal antibodies to states by 50 percent in September—something critics are pointing to in questioning the change.

“It is regrettable that the Biden administration would play politics with people’s lives during a pandemic, by withholding a life-saving treatment and providing mixed messages to Americans,” Christina Pushaw, press secretary for Florida Gov. Ron DeSantis, told The Epoch Times via email.

“Today, I pressed President Biden’s team to explain the sudden rationing of these life-saving treatments—without any warning—after the administration urged us to promote them. It is yet another example of confusing and conflicting guidance coming from the federal government,” Maryland Gov. Larry Hogan wrote on social media.

Sen. Tommy Tuberville’s (R-Ala.) office told The Epoch Times in an email that it’s looking into the matter to see how it can be of assistance.

Florida hasn’t yet seen its supply drop, and some other states said they don’t expect the distribution model change to affect them.

“We do not have any concerns about monoclonal supply at this point of time in Arkansas based on current usage patterns,” Danyelle McNeill, a spokeswoman for the Arkansas Department of Health, told The Epoch Times in an email.

Some governors, including DeSantis, have heavily promoted monoclonal antibodies, which have a high efficacy rate against cases of COVID-19 that don’t require hospital care and are sometimes used following exposure to a COVID-19 patient.

For now, officials are encouraging people to continue seeking out the antibody treatments. Some experts say the drop in supply should prompt people who haven’t received a COVID-19 vaccine to get one.

“The public health message is, while everyone is doing their absolute best to treat and care for individuals who get sick from COVID, the best effort is to avoid that scenario in the first place, and therefore get vaccinated,” Blumenstock said.