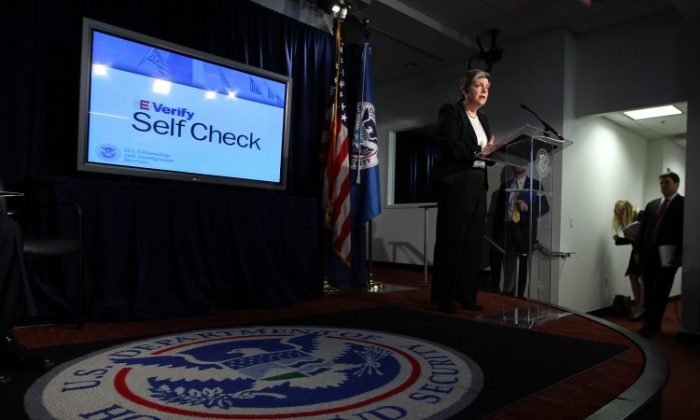 U.S. Secretary of Homeland Security Janet Napolitano speaks during a news conference to announce the launch of E-Verify Self Check service March 21 in Washington. The service will allow individuals in the United States to check their employment eligibility status before formally seeking employment. (Alex Wong/Getty Images)
US

E-Verify, run by the U.S. Citizenship and Immigration Services (USCIS), is a system made to cross reference employers’ new hires to confirm that they are eligible to work in the United States. The idea behind the policy is to have companies be part of the solution in curbing illegal immigration.

By cross referencing data on applicants from the Department of Homeland Security (DHS) and the Social Security Administration (SSA), mismatching data can quickly be found. According to USCIS, more then 288,000 employers use the E-Verify system to check the employment status of potential new hires, with approximately 1,200 new businesses signing up weekly.

This year, five states will have new E-Verify laws in effect: Louisiana, Tennessee, South Carolina, and Georgia will make it mandatory for employers to use the system for new hires; California took the opposite stance, making it illegal for municipalities to force companies to use the system.

In Georgia, after the Legislature passed House Bill 87, the new law mandated that private employers with 500 or more employees must use E-Verify beginning Jan. 1, 2012. Labor shortages were subsequently reported in different sectors across the state. The Atlanta Journal-Constitution reported that in a state survey 11,080 jobs in the farming sector were open.

Private employers with 11 or more employees will be required to use the system starting Jan. 1, 2013.

In a press release this past May, Gov. Nathan Deal of Georgia said, “Georgia is a welcoming state with vibrant immigrant communities and a highly diverse population. These are strengths that enrich the culture of Georgia and expand our economy. There’s no better way to promote the quality of life of all who live here and no better way to protect taxpayers than upholding the rule of law.”

In South Carolina, the new law states that all employees must go through the new E-Verify system within three days of hire. A business that fails to comply with the new law may have its business license suspended by the state. Gov. Nikki Haley of South Carolina, after signing the bill into law, said, “South Carolina is a tolerant state, but it’s also a law-abiding state.”

California took a different position on the E-Verify system, making it illegal for municipalities to mandate the use of the system by passing the Employment Acceleration Act of 2011.

Errors in the system were cited as one of the reasons for the new law, which also cites the U.S. Chamber of Commerce, that said the “U.S. Chamber of Commerce estimates that the net societal cost of all federal contractors using the E-Verify program would amount to $10 billion a year, federally,” and that California businesses “would face considerable odds in implementing such a program.”

Opponents say that the system is not accurate enough, and many applicants are falsely flagged as ineligible to work. According to the American Farm Bureau Federation, “Requiring agricultural employers to use E-Verify without assuring that a workable guest worker program is in place could have a significant, negative impact on U.S. farm production, threatening the livelihoods of many farmers and ranchers in labor intensive agriculture.”

The American Farm Bureau Federation said that it would support a system that had fewer errors and that provided for employers a “safe harbor” for good faith reliance on the system.