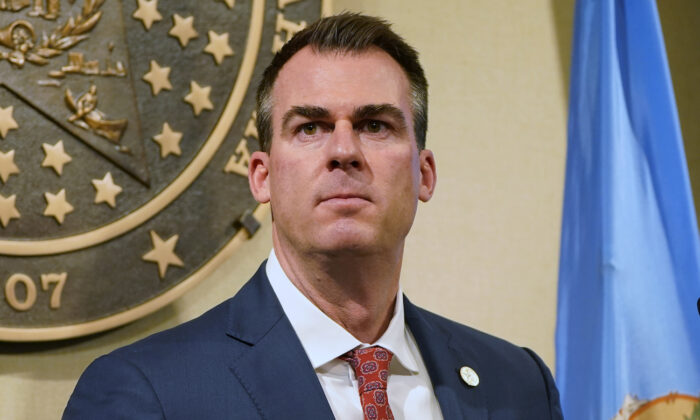 Oklahoma Attorney General John O’Connor, Governor Kevin Stitt, the state of Oklahoma, and 16 members of the state’s National Guard are suing the Biden administration in an attempt to block the enforcement of its vaccine mandate for federal employees, deeming it unconstitutional and arguing that the mandate is tantamount to federal overreach.

In a complaint (pdf) filed on Thursday which names President Joe Biden, Defense Secretary Lloyd Austin, and dozens more federal officials and agencies as defendants, the state argued that the mandate violates the Constitution and has no legal basis.

Unvaccinated members of the National Guard who fail to get their COVID-19 shots by the June 30, 2022 deadline will be barred from participating in drills, training, and other duties, unless they are granted an exemption in accordance with department policy, according to a memo sent to military officials by U.S. Defense Secretary Lloyd Austin.

The complaint also argues that “the president unilaterally has issued this diktat without any semblance of a congressional authorization,” and that, “Congress has enacted no law so permitting the President,” adding that none of the statutory provisions invoked in Biden’s executive order “even remotely empower the president to issue a vaccine mandate or, really, a mandate of any kind.”

“That would be a hard sell anyway because, under the Major Questions Doctrine, a matter of such vast political and economic significance as this vaccine mandate requires explicit congressional authorization,” state officials said.

“Congress has provided no such express authorization. For these reasons, this mandate also runs afoul of the Administrative Procedure Act (APA) both because it is not in accordance with law and is in excess of the Executive’s statutory authority and because it is arbitrary and capricious,” state officials said.

State officials go on to argue that by seeking to strip the Oklahoma National Guard of Department of Defense funding for members who are not compliant with the vaccine requirement, the Biden administration “is trying to disarm the State of Oklahoma from protecting itself, its territory, and its citizens.”

The vaccine mandate “ensures that many Oklahoma National Guard members will simply quit instead of getting a vaccine, a situation that will irreparably harm Oklahomans’ safety and security,” state officials argued.

Oklahoma state officials are asking the court to block the mandate for all federal employees, not just the National Guard.

In a statement published on Dec. 2, Governor Stitt, a Republican, claimed that under Title 32 of the U.S. Code, he holds authority over the state’s Guard members unless they are mobilized by the president.

“Therefore, unless mobilized by the President of the United States under U.S. Code Title10, I retain the authority for all training and governance of the Oklahoma National Guard—including determining if and how training guidelines issued by the president will be implemented,” Stitt wrote.

The governor said the vaccine mandate amounted to an “unconstitutional punishment that individually targets Oklahoma National Guard soldiers and airmen, including withholding their pay.”

“It is unconscionable that President Biden and his administration are choosing to play politics with military paychecks, especially amid the highest inflation rate in 30 years and so close to the holiday season,” Stitt said. “Threatening the pay of National Guard members is manifestly unlawful and unfair, as unvaccinated active-duty personnel do not have their pay withheld.”

Stitt added that he will “continue fighting to protect Oklahoma against this alarming pattern of unconstitutional federal overreach coming from the Biden administration.”

Last month, Defense Secretary Lloyd Austin said he has the authority to require members of the National Guard to get vaccinated against COVID-19 after the Oklahoma National Guard’s newly appointed commander refused to impose a vaccine mandate ordered by the Defense Department.

Stitt had also requested for the mandate for the National Guard to be suspended. That request was denied earlier this week by Defense Secretary Lloyd Austin.