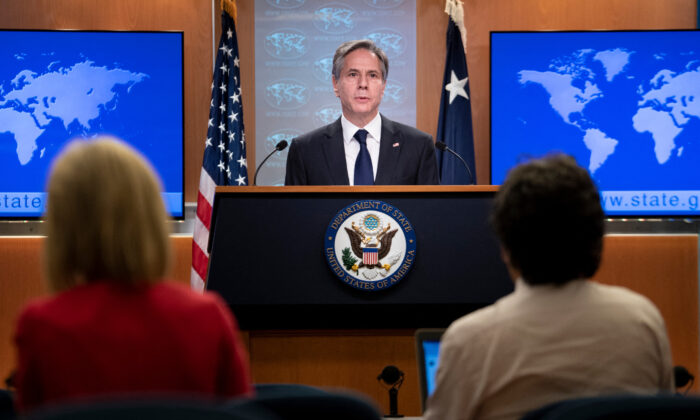 Secretary of State Antony Blinken speaks at the State Department in Washington, on Aug. 2, 2021. (Brendan Smialowski/Pool/AFP via Getty Images)
By Mark Tapscott

Officials at the U.S. State Department declined on Aug. 19 to say why Secretary of State Antony Blinken “paused” a special evacuation unit formed by his predecessor, even as the firestorm of reaction to the bungled Afghanistan withdrawal intensified.

In June, Blinken signed off on the department’s fiscal year 2022 budget justification request submitted to Congress that included a notation that, while $50.8 million was sought for the Crisis and Contingency Response (CCR) program, “the department has paused implementation pending a policy review.”

When asked by The Epoch Times “Why was [CCR] paused, is that still State’s intent, and is [CCR] being utilized now in the Kabul evacs,” the department spokesman declined to respond.

Instead, the spokesman repeated a statement previously provided to media inquiries, saying:

“It is important to note that not only would the proposed [CCR] not have introduced any new capabilities to the department, it was never formally established. Some administrative steps were taken before its establishment was paused, but the day-to-day operations of the team have not changed.

“Every requirement the department delivered on last year, and, since the proposed establishment of the bureau, can be delivered on today in the same manner if appropriate to do so.”

But interviews on Aug. 19 with former senior State Department officials indicate the CCR program had been up and functioning effectively for months when Blinken and his team took over operations following his Jan. 26 Senate confirmation.

A former official pointed to the State Department’s evacuation of U.S. citizens from Wuhan, China, at the outset of the pandemic caused by the CCP virus, which is also known as the novel coronavirus.

“This was the group of brave Americans that rescued more than 800 people from Wuhan in February 2020, when we knew little about the virulence of the virus and danger of that mission,” the former official, who spoke on condition of anonymity, told The Epoch Times.

“These committed civil servants are heroes, and the American citizens and Afghans who helped in the anti-terrorism fight could use their expertise right now.”

Then-State Department spokeswoman Morgan Ortagus described the Wuhan evacuation as “a joint effort by the Department of State, the CDC, HHS, the Department of Defense, and state and local authorities to bring home Americans in need. In total, we evacuated over 800 passengers from Wuhan.”

Throughout the pandemic, the State Department evacuated an estimated 100,000 U.S. citizens from locations around the world, the official said.

Joint Chiefs of Staff Chairman Gen. Mark Milley described the present evacuation effort from Kabul as “likely the second-largest” such operation by the United States since more than 20,000 Americans were rescued during a destructive volcanic eruption in the Philippines in 1991.

The CCR was specifically authorized by then-Secretary of State Mike Pompeo on Sept. 21, 2020, to be developed from the department’s existing OpMed program.

Pompeo viewed the CCR as needed to upgrade the department’s ability to prevent a repeat of the Benghazi tragedy in Libya in 2012, when Islamic terrorists stormed a U.S. facility there, killing three security personnel and Ambassador Christopher Stevens before U.S. forces arrived on the scene.

As was often the case with new initiatives during President Donald Trump’s tenure in the White House, the creation of CCR prompted opposition from among the department’s career ranks.

Diplopundit reported in October 2020 that many career employees “are said to be up in arms about the rapid formation of this new bureau—which happened in a span of just four months—with apparently no input from the field.”

Regarding the present confused situation in Afghanistan, another former senior official told The Epoch Times that “the French are doing armed runs into Kabul to get their people,” and that “they and the Brits will do that until they get everyone they want out and then they will pack up and go without telling us.”

As The Epoch Times has reported, Biden told ABC News’ George Stephanopoulos that U.S. officials estimate there are between 10,000 and 15,000 Americans in Afghanistan, and the “estimate we’re giving” is 50,000 to 65,000 Afghan allies, including family members.

“Americans should understand that we’re going to try to get it done before Aug. 31,” Biden said in the interview, his first one since the Taliban took over the country. The president said the U.S. military will attempt to evacuate all Americans out of the South Asian country by that date.

Earlier this week, a spokesman for the Taliban warned in a Sky News interview that U.S. forces need to withdraw from the country by Sept. 11, which is the date of the terrorist attacks that toppled the Twin Towers in New York 20 years ago.