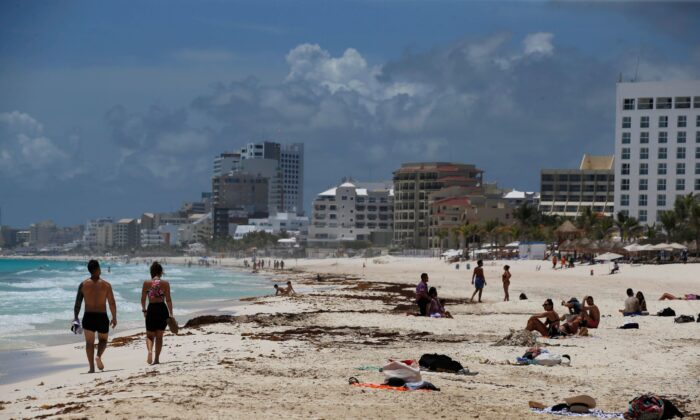 The U.S. State Department on Monday issued a travel warning for American citizens visiting tourist areas in the Mexican state of Quintana Roo due to “recent incidents involving taxi and Uber drivers.”

The “security alert” said that American citizens should be wary of “application-based transportation services in Mexico,” the State Department wrote. Quintana Roo encompasses Cancun and other popular resort areas on the Yucatan Peninsula.

“Application-based car services such as Uber and Cabify are available in many Mexican cities, and generally offer another safe alternative to taxis,” the bulletin stated. “Official complaints against Uber and other drivers do occur, however, and past disputes between these services and local taxi unions have occasionally turned violent, resulting in injuries to U.S. citizens in some instances.”

Medallion taxi drivers in the state have reportedly harassed and attacked Uber drivers and passengers due to complaints of competition in recent days. This week, medallion taxi drivers blocked all three Cancun Hotel Zone entrances, according to local media reports and photos published online.

A reporter with the Riviera Maya News outlet said that dozens of taxi drivers blocked the three main roadways that go into the hotel zone on Monday, forcing hundreds of tourists to scramble to find a way in or out of the zone. The state’s National Guard and local police were deployed to deal with the demonstration, it was reported.

The Cancun police department shared photos of travelers getting into the beds of police trucks, and said that “given the blockades on the Kukulcan boulevard, our transit officers helped people get to the airport.” Cancun’s mayor called on the taxi drivers to show restraint amid the unrest.

Some Cancun residents also posted videos or photos of taxis encircling suspected ride-hailing cars, and one man said he was just giving a ride to some people when his car was pelted with stones and dented by taxi drivers.

“I am not going to allow a small group to damage the reputation of the resort and human safety,” Mayor Ana Patricia Peralta said in a recorded message, according to The Associated Press.

And State Secretary Cristina Torres Gomez told reporters that the “free demonstration of the citizens of Quintana Roo” is fine “as long as it does not violate or harm the rights of third parties.”

“We listen to absolutely all groups, but under no circumstance are we going to allow peace and tranquility to be violated, nor for the roads to collapse in a state that is Mexico’s window to the world,” she added.

Ride-hailing apps had been blocked in Cancun until earlier this month, when a court granted an injunction allowing Uber to operate. Given the high cost of local medallion taxis in Cancun, many travelers prefer to use apps.

A group representing about 12,000 members in Cancun called the Taxi Union was angered by the court ruling, issued on Jan. 11, that allows Uber to operate, according to the Mexico Daily News. That triggered the protests this week.

On social media, some users targeted the Taxi Union and called on people not to use medallion taxis.

“The Quintana Roo taxi drivers are just another cartel. Don’t ride one,” a Twitter user said. “These mafia taxi drivers, just like the sargassum, are ending Cancún,” another user said, the outlet reported.

But the union described the court ruling as unjust.

“Just as today voices have been raised condemning taxi drivers, we also raise our voices to demand certainty and action against the activities that violate our source of income,” the Andres Quintana Roo taxi union said in a statement to the Daily News.

Amid cartel-related violence, crime, and kidnappings, the U.S. State Department frequently issues travel alerts against traveling to certain Mexican states. Earlier this month, the agency warned Americans not to travel to Sinaloa state following reports of cartel violence sparked by the arrest of a powerful drug lord.

Last year, amid a spate of cartel-related violence across Mexico, the State Department posted a kidnapping advisory that applied to several Mexico states.

“Violent crime—such as homicide, kidnapping, carjacking, and robbery—is widespread and common in Mexico,” the State Department said at the time.