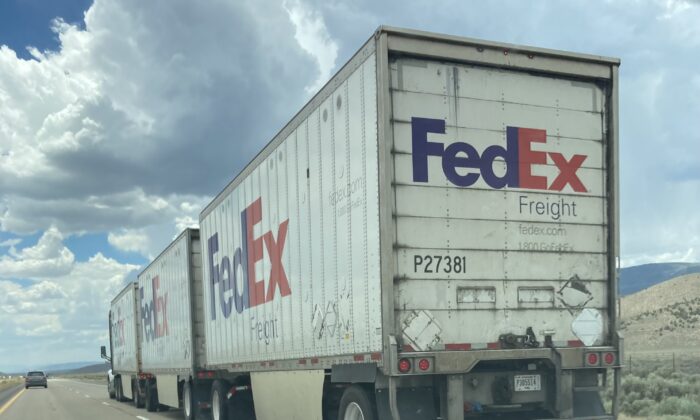 A FedEx truck hauling three trailers was a common sight on the Interstate 15 in Utah, on June 29, 2022. (Allan Stein/The Epoch Times)
By Kevin Stocklin

Montana Attorney General Austin Knudsen, together with 17 other state attorneys general, are asking shipping companies UPS and FedEx to explain their newly implemented policies to track and record Americans’ firearms purchases and disclose whether these policies have been coordinated with the Biden administration.

In letters sent on Nov. 29 to FedEx CEO Raj Subramaniam and UPS CEO Carol B. Tomé, Knudsen and his co-signers wrote that the shipping companies’ policies “allow your company to track firearm sales with unprecedented specificity and bypass warrant requirements to share that information with federal agencies.”

“What both of these companies are saying is that they’re doing this so they can better cooperate with law enforcement,” Knudsen told The Epoch Times. “That’s all fine and well, until you find out that that’s a violation of federal law.”

Based on reports from gun stores, Knudsen’s letter states, FedEx and UPS are now requiring federal firearms license holders to provide details of each shipment to the shipping companies, including the contents and recipient, allowing them “to create a database of American gun purchasers and determine exactly what items they purchased.

Citing the new policies, the letter states: “Perhaps most concerning, your policies allegedly allow FedEx [and UPS] to ‘comply with … requests from applicable law enforcement or other governmental authorities’ even when those requests are ‘inconsistent or contrary to any applicable law, rule, regulation, or order.’ In doing so you—perhaps inadvertently—give federal agencies a workaround to federal law, which has long prevented federal agencies from using gun sales to create gun registries.”

“The ATF [Bureau of Alcohol, Tobacco, Firearms and Explosives] is hoping they’re not going to have a warrant problem,” Knudsen said. “They could just go get this information from UPS and FedEx.”

FedEx and UPS’s new gun-tracking policies follow efforts by Visa, Mastercard, and American Express to also monitor purchases from gun stores, with the intention of handing that information over to federal law enforcement. The Fourth Amendment of the U.S. Constitution prohibits the federal government from conducting searches of U.S. citizens without a warrant and “probable cause” that a crime was committed.

Increasingly, however, banks, credit card companies, and now shipping companies are conducting those searches on the government’s behalf.

The letter demands that the shipping companies respond within 30 days, clarifying their policies and explaining whether or not they acted in coordination with the ATF or any other government agency. It also asks them to clarify a reported “gag order” under which they directed gun shops not to disclose the terms of this policy to the public.

The two letters to UPS and FedEx were virtually identical because the policies the companies implemented appear to be strikingly similar, raising the additional issue of possible collusion between companies that hold an oligopolistic position in shipping. Collusion in restraint of trade has long been illegal under U.S. antitrust laws, including the Sherman Antitrust Act of 1890.

“It’s either collusion, they’re working together, or what I suspect is, it’s probably originating out of the Bureau of Alcohol, Tobacco and Firearms, or the Biden administration,” Knudsen said. His letter recommends that the shipping companies “consider taking actions to limit potential liability moving forward, including the immediate cessation of any existing warrantless information sharing with federal agencies about gun shipments.”

If the shipping companies don’t answer his questions within 30 days, Knudsen said, “I’ll probably start with an actual formal civil investigative demand where we’ll ask for some documentation. That’s short of a subpoena and an actual lawsuit, but, ultimately, if they don’t want to cooperate, a lawsuit is where we’re going to end up.”

In response to the letter, FedEx told The Epoch Times in a statement that “FedEx is aware of the letter from the state attorneys general. We are committed to the lawful and safe movement of regulated items through our network.”

UPS responded that it “has not bypassed any laws to provide customer information to the Biden administration or federal agencies related to the shipment of firearms. UPS will only provide information about our customers or shipments when required to do so by law, such as in response to a subpoena or a warrant.”

UPS “will respond to the letter sent by several state attorneys general to answer their questions and clarify misinformation. UPS will continue to abide by all applicable laws in providing service for firearm shipments,” it stated.

“The policies set forth by FedEx and UPS are troubling, to say the least,” Mark Oliva, public affairs director of the National Shooting Sports Foundation, told The Epoch Times. “They carry with them serious risk of privacy concerns for law-abiding gun owners, and Montana Attorney General Austin Knudsen is correct to be wary of how this information is to be used.

“We know that pressure was applied to these common carriers by antigun Democratic senators and the result was these new policies. It does seem rather coincidental that the Biden administration and certain elected officials that have been frustrated in instituting extreme gun control measures are suddenly and curiously seeing big businesses doing exactly what they are not allowed to do by law.”

Knudsen was asked why the U.S. Federal Trade Commission, which is tasked with protecting consumers against corporate collusion, is taking no action against what appears to be a coordinated effort by the shipping companies to target the firearms industry.

“I think there’s probably pressure from the White House to not do that, which is why you’re seeing AGs in states like Montana that have joined me to push back on this. If the federal government isn’t going to do their job, we’ll step in and make them do it.”

He said that gun shops are being targeted not only by credit card and shipping companies but by insurers as well.

“I’m aware of a number of FFL brick-and-mortar gun shops, and also some retailers that are just middlemen in Montana, that have been denied property-casualty insurance on their business property simply because they’re in the firearms industry.”