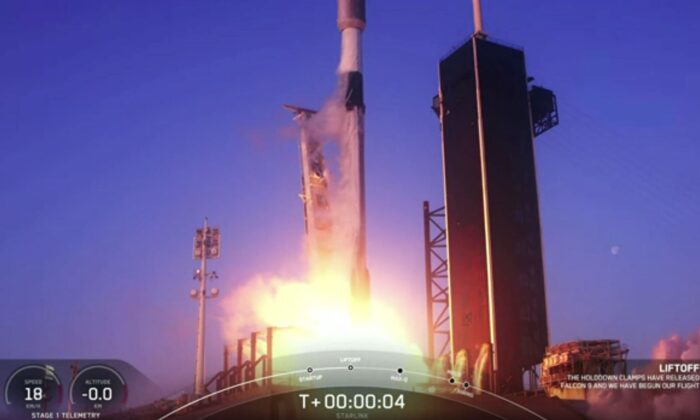 Countdown and launch of Falcon 9 into orbit at Cape Canaveral in Fla., on May 18, 2022. (SpaceX via AP/Screenshot via The Epoch Times)
China

One problem, expert says, is that China and Musk both see space as a strategic domain—but the US doesn't
By Gary Bai

As Americans try out the newest Starlink dishes on their recreational vehicles, a space expert says Elon Musk’s Starlink makes the Chinese Communist Party (CCP) “nervous,” as the SpaceX satellite internet business is the “only” player in the field now when it comes to the United States’ strategic space race with China.

“It is important to understand that Elon Musk’s SpaceX company is the only thing keeping the U.S. in the space race with China,” Brandon Weichert, space expert and author of “Winning Space: How America Remains a Superpower,” told The Epoch Times in an interview in late May.

Weichert said Starlink, now “possibly a vital component of war-making,” is making America’s rivals “nervous,” even as Musk is under a two-fold “attack” by the White House and the military establishment.

Starlink, a satellite internet constellation operated by Musk’s spacecraft company SpaceX, currently consists of over 2,400 satellites that orbit the earth at an altitude more than 60 times lower than the satellites that carry most of the world’s internet today.

The reason U.S. adversaries are nervous about Starlink, according to Weichert, is that the satellite system is resistant to mass-scale attacks U.S. adversaries are currently capable of and thus makes “destroying” America’s space infrastructure much more difficult than before.

“Starlink is a great example of a private-sector profit motive providing a key example of how the military’s vital-yet-vulnerable satellite constellations can be protected,” Weichert said.

“The strength of Starlink is its redundancy. So basically, we saw last summer, a solar flare knocked out something like 20—or maybe it was even 40—Starlink satellites, and Musk didn’t even bat an eye. Within a day, those systems were replaced because they’re small and they’re cheap.”

As Weichert details in his book, Russia and China previously had the capability to prevent the U.S. military from accessing communication networks by attacking U.S. satellites, for example by using electromagnetic pulse attacks.

“Russia and China are both are threatened by this capability because they know how the Americans could use that to an advantage,” he said. “And that is why those two countries are livid right now and trying desperately to figure out countermeasures to maintain what they think is their advantage, with counter-space capabilities, the ability to deny the Americans use of space in the event of a conflict.”

He said one sign indicating that the CCP is threatened by Starlink is that the CCP complained to the United Nations that the Chinese Space Station “Tiangong” had to maneuver to avoid a collision with Starlink satellites in two separate incidences.

“China came out and they were screaming about how Elon Musk’s—one of his Starlink satellites—almost collided with their new modular space station, which of course was an over-exaggeration … but they were tipping their hand by telling us that they’re very scared of this new communication system,” Weichert said.

The U.S. refuted the CCP’s claims in a responding note verbale. SpaceX issued a statement acknowledging the encounter and saying it monitors its satellites’ flight trajectory to maintain a safe distance from Tiangong.

The expert said Starlink has cyber-defense capabilities that seemed impressive even to defense specialists at the Pentagon.

Therefore, if China’s military attempted a cyber-attack on Starlink’s onboard operating systems, Weichert says, it “would be in for a very rude awakening.”

Weichert says SpaceX is now the “only thing keeping the U.S. in the space race with China,” yet it’s forced to maneuver through institutional forces within the United States.

“The problem now is our own government seems to not recognize or care much for the fact that SpaceX is the only property right now that’s keeping America in the new space race, keeping us competitive,” Weichert said. “NASA is asleep at the switch and Space Force can’t figure out what it wants to do.

“Meanwhile, American leaders, for the most part, are not envisioning space as a strategic domain. China does. Musk does.”

The reasons for this lack of action, Weichert said, include a glaring disagreement in political ideology between Musk, the CEO of SpaceX, and the White House.

SpaceX “is also under a lot of political pressure because of Elon Musk’s political stances, particularly recently. Elon Musk is not a friend of the Biden administration,” Weichert said, adding that this disagreement has “put a giant target” on Musk’s back.

“They started now going after Musk. They’re going to go after him with a regulatory issue over the purchase of Twitter: not because of anything wrong, just because he’s a political rival,” Weichert said. “So the problem now is not the Chinese or the Russians.”

Another key reason behind America’s stagnation in the space race, Weichert said, is a cartel-like military establishment who are “nowhere near as innovative these days as SpaceX.”

“What you have now is basically a cartel of a handful of very powerful defense contractors who don’t really care about creating weapons systems that are both efficient, that are time-friendly, in terms of development, and that are cheaper than what they are right now,” he said.

“And so SpaceX undermines that old cartel approach to the defense industry. That’s why Musk is hated. That’s why he’s under attack from the bureaucracy plus all the political attacks in the Biden administration.”

“Whether it’s SpaceX getting the contract to do this or another firm, they’ve got to replicate that SpaceX model. That’s the key,” Weichert said.

In his book “Winning Space: How America Remains a Superpower,” Weichert warns that America must undergo a paradigm shift in its vision of space and see space as a “strategic domain” so as to prevent a “catastrophic surprise attack” from Russia or China—which he calls, the “space Pearl Harbor”—during future times of war.

“America is a juggernaut. When we get moving as a country, we’re unstoppable. Taking the initial steps, however, is always the hardest for our country,” Weichert said.

“Today, the United States faces a space Pearl Harbor—and everyone in Washington knows it.”

U.S. Space Force officials didn’t respond by press time to a request by The Epoch Times for comment.