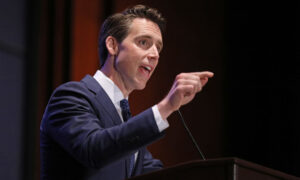 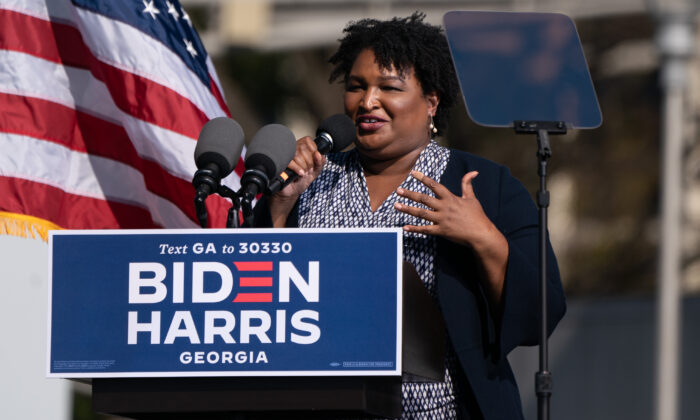 Stacey Abrams Wins Big in Georgia, and She Wasn’t on the Ballot

Wandering around the Republican senatorial runoff party at Atlanta’s Grand Hyatt on Jan. 5, as the faithful mingled, quaffed beverages, and ate the usual mediocre hors d’oeuvres while keeping one eye cocked on the big screens displaying the votes and another on the lookout for local political heavies such as Gov. Brian Kemp—the man only the day before excoriated by Donald Trump—it became clear to me who the real political leader of Georgia is, and she wasn’t in the room.

Like her or not—and I don’t—Abrams a Democrat, was the clear victor on Jan. 5.

She may have lost the gubernatorial election to Kemp, but she exercises far more real power over her state than the man who won.

Abrams—by force of personality and via manipulation of the voting rules in getting Georgia Secretary of State Raffensperger to acquiesce to practically anything she wanted—was able to engineer the victories of two candidates (Raphael Warnock and Jon Ossoff) who have about as much business representing their homerooms on the junior high student council as they do a large state in the U.S. Senate.

In other words, none.

But, to be candid, the Republicans weren’t putting forth Daniel Moynihan or Daniel Webster either.

David Purdue and Kelly Loeffler are nice folks, but they aren’t figures likely to go down in the annals of legislative history. Nor are they anything particularly new in American politics.

In no sense are they “deplorables” or Tea Party types. They are conventional figures from the Republican Party of yore.

They may even have won—this election, too, may have been stolen—but that seems less likely because both Pajama Boy Ossoff and near-Reverend Wright clone and possible spousal abuser Warnock apparently defeated their adversaries by bigger margins than Biden bested Trump in the state.

Could “Boss Abrams” have that much power? I’m not sure.

But even if this proves to be a “second steal,” GOP officials here now have themselves to blame. “Fool me once,” as they say. (Or is it even possible that some of them even wanted it to turn out this way?)

We may not like to hear it, but the Georgia debacle, whatever its cause, has cast a dark shadow over the doings on Jan. 6 in Washington.

Demonstrations are good, and in this case a necessary thing, but more than mass protest, a Republican Party rectification is needed, whether it’s still called the Republican Party or not. (That’s largely irrelevant.)

Trump’s Revolution, if we can call it that, is in danger of experiencing a Thermidor. The “deplorables” must go forward into serious organization or they will go backward.

I was reminded of that, too, attending the party in Atlanta. I could have been in a time warp. Again, everyone was friendly, convivial, but it was a decidedly an “old GOP” event with a VIP room and even more exclusive back rooms I never saw where, presumably, the big donors hobnobbed with the party elite.

The “new GOP”—the one that elected Trump in the first place—was a “people’s party,” despite being led, ironically, by a billionaire.

This dichotomy is hardly new. Elites have formed in all sorts of cultures throughout history in various ways to govern the masses. Communism is a perfect example of that, as is today’s Democratic Party.

It’s not easy to overcome, considering that history and what has happened in today’s America.

I have no doubt the presidential election was stolen, even more because I’m privy to information from Europe that may, repeat may (I am waiting for solid confirmation) make us all gasp at the boldness of what happened and change the game considerably. We shall see.

But even if this turns out not to be true, the facts on the ground are enough to tell us this is no time for the status quo ante.

My short excursion to Atlanta from Nashville, Tennessee, underscored that. If the Republican Party doesn’t reform itself, we may soon be looking at a president as radical as a President Abrams. What we have now is bad enough.