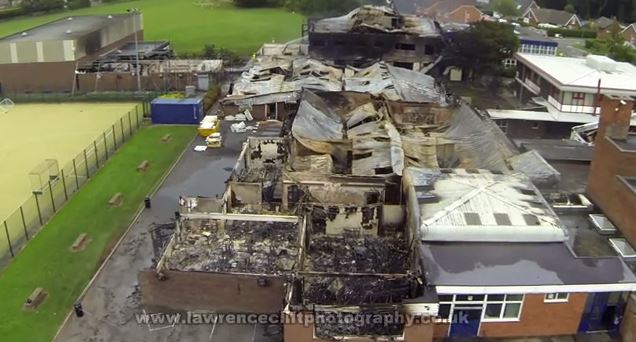 The St. Mary's Catholic Technology College buildings on September 2, 2013, after a fire that started burning a day prior spread quickly and burned much of the interior. This aerial view of the college, in Leyland in Lancashire, England is shot from a quadracopter, and is published here courtesy of Lawrence Clift Photography. (Screenshot/YouTube)
UK

After the fire that began September 1 was finally extinguished, the people of Leyland, England, are now left to assess what is left of St. Mary’s Catholic Technology College buildings.

Headteacher Miss K McNicholas said in a statement that while the fire has caused “significant damage,” the school is determined to get lessons up and running as soon as possible. Parents should make arrangements to keep students at home for the remainder of this week.

“Still upset my old high school has been burnt to smithereens,” said Laura Martin on Twitter. “I absolutely loved my time there, a place full of memories just gone!!”

“Relocation of pupils, impact on parents, teachers, exams etc.,” he said on Twitter.

The five boys, aged between 11 and 15, who were arrested on suspicion of arson have been released on bail, according to the Lancashire Police.

More information, photos, and videos below this new video of the aftermath of the fire, courtesy of Lawrence Clift Photography:

While there are some parts of the building that have remained unaffected, but most of the college “has been gutted,” according to the Lancashire Fire Service.

The school, which was built in 1957, had no sprinklers and the roof was constructed using sandwich foam boards, which, along with strong winds, helped spread the fire.

After 20 fire engines and 125 firefighters were deployed to battle the fire at its peak on Sunday, the last of the flames were extinguished around midday on Monday.

Liam Gardner, a firefighter, tweeted at 12:47 a.m. on Monday that he had just left the scene after helping battle the fire for seven-and-a-half hours.

“It’s time for bed,” he said. “Heartbreaking being in the ruins of classrooms seeing children’s work ruined.”

Julian Williams, another firefighter, said around the same time that he just got home from battling the fire. “We threw everything at it but the damage is considerable,” he said. “Massive blow for the Leyland community.”

Becky Claire, a teacher at the college, said that “we are just all numb.” She thanked for firefighters for doing all they could do.

Leyland is a town in the county of Lancashire with a population of about 35,000. It’s about 200 miles from both Glasgow and London.

————————————Original Storify below, illustrating the long struggle against the fire

[View the story “Fire at School in Lancashire, England” on Storify]