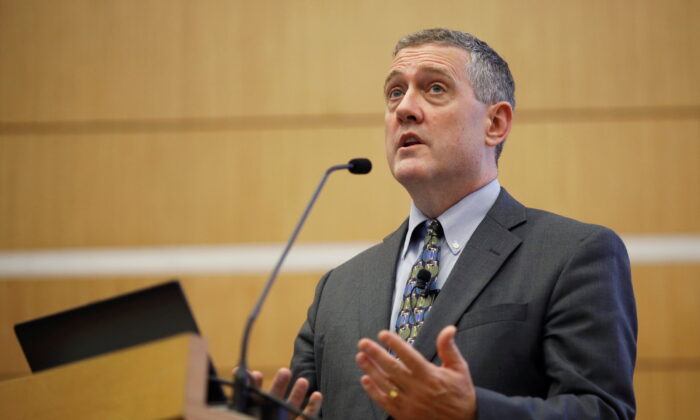 The president of the St. Louis Federal Reserve, James Bullard, called for a tougher approach to control skyrocketing inflation by raising interest rates more substantially and said that the Fed needs to act, in a statement on April 8.

He believes that the central bank is “behind the curve” on interest rates, “but not as much as it looks like,” as inflation is still “too high.”

Bullard, who is the most prominent hawk on the Federal Open Market Committee (FOMC) in favor of a tighter monetary policy, said that a rules-based approach suggests the Fed should hike its benchmark short-term borrowing rate to about 3.5 percent.

However, according to CME Group data, markets pricing in rates and hitting the 3.5 percent rate in the summer of 2023 appear to be a bit slower than what Bullard anticipates.

His comments came the day after the release of meeting minutes from the FOMC conference in March, which revealed that Fed officials were close to approving a 50-basis-point rate hike, but instead settled on 25 points due to the undetermined impact of the conflict in Ukraine.

Bond market adjustments to the central bank’s new aggressive policy, in which yields have surged higher, suggest rates are not that far askew, said Bullard.

“If you take account of [forward guidance], we don’t look so bad. Not all hope is lost. That is the basic gist of this story,” he said.

Several members of the FOMC agreed that the Fed should start to shed some of its assets on its nearly $9 trillion balance sheet, approximately at a maximum of $95 billion a month.

The Fed is fighting in an effort to control inflation, which is running at its fastest rate in more than 40 years.

Bullard suggested 100 basis points worth of hikes by June and that the benchmark fed funds rate now is too low at a range targeted between 0.25-0.5 percent.

“U.S. inflation is exceptionally high, and that doesn’t mean 2.1 percent or 2.2 percent or something. This means comparable to what we saw in the high inflation era in the 1970s and early 1980s,” said Bullard.

“Even if you’re very generous to the Fed in interpreting what the inflation rate really is today … you’d have to raise the policy rate a lot,” he continued.

Bullard is in favor of the policy of the late Fed chairman Paul Volcker, whose push for an increase in rate hikes in the early 1980s gradually lowered inflation, but not without first triggering a major recession.

“The difference between today and the 1970s is central bankers have a lot more credibility,” he said.

“In the ’70s, no one believed the Fed would do anything about inflation. It was kind of a chaotic era. You really needed [former Fed Chair Paul] Volcker to come in … . He slayed the inflation dragon and established credibility. After that, people believed the central bank would bring inflation under control,” he concluded.