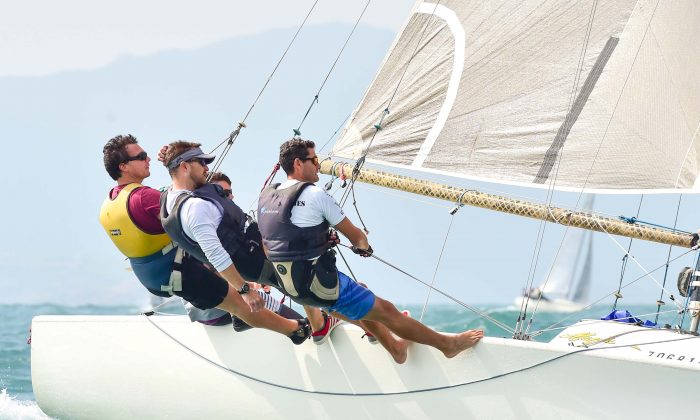 The R2B2 team out on the wire during the Sportsboat Class Championships Series 2016, off Clearwater Bay on Saturday Nov 12, 2016. (Bill Cox/Epoch Times)
HK Sports

HONG KONG—Day 1 of the Sportsboat National Championships took place on Saturday Nov 12 starting at 11:30am with 4 geometric races with 11 competitors, a GP26, 2 J 80’s and 8 Magic 25’s. A 2nd day of racing is scheduled for this coming Saturday Nov 19. Weather at Shelter Cove was placid and windless but after getting into open seas beyond Shelter Island the wind picked up and the swell increased. By the time we reached the designated race area off Clearwater Bay there was a 1.5 metre swell and a 6 knot wind. Wind speed varied through the day up to 10 knots.

Racing was delayed for half an hour to allow boats to arrive but one of the leading contenders Dion Houghton helming “R2B2” was late starting the first race, his engine failed and he had to return to base for a replacement to get him out of Shelter Cove.

Steve Bourne in “Merlin” set an early convincing lead, sailing with his ex-co-owners Chris and Chrissy Brooke who hadn’t set foot in a Magic for 15 years! Chris had put on a couple of pounds and this was too much for a trapeze wire and Kerplooshe, in he went, after rounding the last beat. Quickly back on board, Merlin’s lead was not enough to take the race, and the two J70’s “San Long” and “Tuco” took a deserved 1, 2 respectively.

Race 2 saw the “R2B2” team out in front racing closely with “Merlin” until yet another trapeze wire broke. “Merlin” dropped to 5th with “R2B2” taking the win, and amazingly it was an absolute dead heat for 2nd between the two J70’s. That must have been some race! Joe Chan in “Catch 22” was 4th.

The wind was beginning to drop and Race 3 was a classic Dion and Steve in a head to head battle all the way round. The final run was to prove the most exciting with Steve rolling Dion at the spinnaker hoist as his kite went in the water. However Dion recovered in time to luff Merlin into a broach, and stretch away. Merlin’s better kite trimming put them on R2B2’s transom but with 100 yards to go Dion looked set for a win. However, amazingly “Merlin” managed in a much lighter breeze to work lower and faster to break through the lee of “R2B2” and take the race by a mere 7 seconds. Sam Levine had a good race to take 3rd ahead of Joe Chan in “Catch 22”. The J70’s seemed to suffer in the lighter breeze.

The final race of the day was different as “Merlin” went looking for a lee bow from the tide coming out of Shelter cove and this didn’t work, leaving the “R2B2” team a straight win but “Merlin” recovering to 2nd place and Darren Catterall pipping Dan Tulberg for 3rd, Cem Yurdum in his GP 26 “Havoc” had his best race of the day with a 4th place.

So at the end of the first day despite some mishaps “Merlin” is leading the series on 11 points, R2B2 is lying 2nd with 14 points, and then the two J70’s with Dan Tulberg’s “Tuco” (17.5) just ahead of the “San Long” team on 18.5 points. Certainly with some high discards to lose there is all to play for on Day2, next Saturday! Will Steve Bourne finally win the class championships after 15 years of trying? Time will tell!

Final results can be seen at: http://www.rhkyc.org.hk/upload/Sailing/Classes/Sportsboat/SBRClassChampsOverall.htm

Stephen Bourne contributed to this article.